You may have seen ReForm School’s student of the month, TribeWanted Baby Zaishus. Tribewanted is a “unique community tourism project that is simultaneously based on Vorovoro Island, Fiji and online” and a zaishu is “a portable, simplified seat / table / box that slots together without nails, screws or glue.” The artist, Kaz Brecher, sent me some additional information about the project. Thanks Kaz.

I started thinking about collaborating with Matt Butler, the designer of the Zaishu flat-pack stool, shortly after purchasing one for myself and falling in love with its design and the company’s ethos. In May 2006, I got involved with TribeWanted.com as it aligned with all of my interests – a sustainable tourism initiative which leverages online community to benefit an island community in the economically-depressed north of Fiji. It struck me that we could do a limited edition of the Baby Zaishu chairs, painted with Fijian patterns, to benefit the local school.
So, after my first trip to visit Vorovoro, the small island in the Mali District, I met with Helen Punton, of Zaishu, while in Sydney, who was excited about the idea. Meanwhile, Billie and Tootie of Reform School, a gift shop in LA that carries responsibly-made or environmentally-friendly art products, were looking for a way to support my involvement with TribeWanted. I proposed that they carry the Baby Zaishus, and they agreed.
So, one year later, after running to be the April chief of the TribeWanted.com project, I was off to Fiji again, this time with silk screens and water-based paints in tow. Each month a chief is elected and given a small portion of the operating budget to use towards a legacy project. I used this money to help defray the hefty cost of materials. The raw laser-cut wood pieces were shipped from Australia to Fiji. And I brought everything else with me.
I chose the three patterns carefully, to represent the breadth of Fijian art influences: a traditional Lauan tapa pattern – tapa is a stencil process that was originally done on bark paper and is used in all ceremonies; a woven mat pattern – mat weaving is the main art form in the north of Fiji; and a bula flower pattern, which has become synonymous with modern Fiji.
Base coat was applied to the top in cream, to approximate the bark, and to the bula sides in the colors of the sea off the coast of Vorovoro, which sits on the Cakalevu Reef, the third largest in the world. Three silk screen patterns were applied, which was difficult, back-breaking work in the heat and humidity. The paint dried in the screens after about 10 pulls. So, we’d have to stop and wash the screen, let it dry, and start again, which was exhausting given the 250 pieces. And finally, details were hand-painted onto each side.
I presented gifts of the Zaishus to the Mali District School, who will also receive all of the profits from the sales, to Tui Mali, the chief of the area, and to elders of the tribe who were instrumental in the project. I then hand-carried the chairs back to LA as luggage, so as to cut down on more shipping carbon impact. And the chairs are now available for sale at Reform School in LA or on their website. 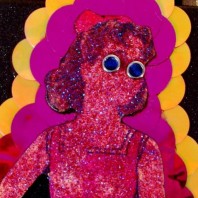