You know when companies combine two words to make a brand name? Like Verizon, or Go-Gurt? There’s a term for this, portmanteau, which I just learned from Wikipedia, whose name is itself a portmanteau. I’m surprised I didn’t know the term, because — unbeknownst to my college professors and the public at large — ludicrous portmanteaux are the origin of my entire creative oeuvre. The jig is up!

About a year ago, I was going through a big tech and web-culture phase, reading Boing Boing all the time and learning ActionScript. I began incorporating microcontrollers into the things I made. I listened to Kraftwerk. With all this tech and web and synthesized music around me, it was only a matter of time before “Moog + blog = Bloog” popped into my head.

The Bloog is the most complicated portmanteau project I’ve done so far. It’s a synthesizer that uses not oscillators, but RSS feeds, one that manipulates not sounds, but words. The look and functionality come from 1960s-vintage Moog modular synths, but the material and results are 100% Web 2.0. This machine allows you to scramble the words and sentences of the feeds it pulls in, recycling the old material and “synthesizing” new blog posts. The knobs scroll through the text of each entry and the sliders change the number of words appearing onscreen.

At its core is a MAKE Controller (makershed.com), which sends analog signals from the potentiometers out to a custom Flash movie on a nearby PC. The PC pulls in the RSS feeds and outputs the text to the Bloog’s display (an old HP handheld).

Though this configuration was nicely functional, I realized there was something missing — beautiful lights! Since my design was based on Moog synths in only the laziest possible way, I figured it wouldn’t do too much harm to add a line of LED “white-space warning lights” next to the display. They illuminate first in green, then reach a red zone if the operator has reached a dangerously low level of verbosity, a killer in today’s blogosphere.

The Bloog is the first in what I hope will be a long line of preposterous wordplay-based machines. I have them catalogued on my website under “useless” right now, but perhaps I should come up with a better term. Portmantool? Mechanteau? Portmantraption? OK, I’ll stop. 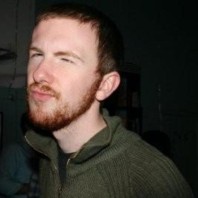 At this very moment, Andrew Haarsager is either making up more useless objects or writing about them at nosmarties.com.