Another holiday season, another excuse to get other people to buy you robots (or to treat yourself). From bot brains to pets and toys to robots that can help you around the house, there’s something here for everyone.

Pleo (PleoWorld, ~$300)
Pleo is a robotic dinosaur toy designed to emulate the appearance and behavior of a week-old baby Camarasaurus. The original ones were made a few years back by a company called Ugobe, and you can still find them through Amazon and Ebay. Unfortunately, Ugobe went bankrupt in 2009, but they passed the torch (and the Pleo) to Innvo Labs. The result is the new Pleo rb (rb = reborn) that should be available any day now! I have the original Pleo and can personally attest to its awesomeness. It recently became the new lab pet in my office since my cat at home doesn’t enjoy it as much as I do.

Co-Robot Kit (Makershed, $29.99)
As a mechanical engineer, I’m completely floored that any person or company was able to create a walking robot with just one motor. And it doesn’t just walk, it can push itself back up if it falls. Although the “walk” looks more like what a toddler might do after a pot of coffee, and it often somersaults in the process of pushing itself back up, it’s still darn impressive.

Iron Man Walking RC Robot (Amazon, $40.54)
Remote control missile launchers from the shoulders and wrists? Check. Light-up eyes? Check. Ready-for-battle voice? Check. Scary robotic walking motion? Check. This has everything you’d expect in a 12″ Iron Man and more. Imagine my delight when this little gem showed up on my nephew’s Christmas list! Until they come out with a full Iron Man suit (c’mon, you know you want one) this is the next best thing.

The humanoids at Makerbot have done it again. The Thing-O-Matic is the new and improved version of their original CupCake CNC, complete with automated build platform. Not only is it a wonderful centerpiece for any table, but this robot can actually make you things. And those things could be for other robots. And then those robots could make thing for other robots, and then… upload all your designs to Thingiverse and have a robot party! Print just about anything you want that’s smaller than the 4″ x 4″ x 5″ usable build area. You can choose from lots of different colored plastics, including fluorescent, glow-in-the-dark, and PLA, an eco-friendly plastic made from corn that’s biodegradable. And if a friend or family member of yours has a Thing-O-Matic, you can save money shipping holiday presents by just emailing them the designs for their presents so they can print them out!

Nao (Aldebaran Robotics, $16,000)
Nao is the cutest, most capable little humanoid you’ve ever seen. The only thing you have to worry about at this price is whether you want a toddler-size robotic assistant, or say, a car. I vote robot. It’s currently only available in Nao Academics Edition, but stay tuned for the Nao Compagnon for private users. So if you’re affiliated with any kind of research or educational program, from graduate labs to a high school classroom, head on over to Aldebaran and get yourself a deal.

This Gorilla bot from Bossa Nova Robotics, a spin off from my alma-mater (Carnegie Mellon University), might run (er, roll) faster than you. The pseudo-scary gorilla sounds give this bright yellow bot some personality while it rolls/dances/chases you around the room.

When I was little, we used to poke holes in each side of an egg, blow out the yolk, then decorate the hollow egg to use as a Christmas ornament. Now there’s an alternative to scribbling on a curved surface by hand — The Egg-bot! Whether you celebrate Christmas or worship the Flying Spaghetti Monster, I’m sure you can find a place for a beautiful robotically decorated egg (or light bulb, or ping pong ball, or… anything else round).

No robot would be complete without a brain. And if you’re going to make your own robot, a great brain to use is the Arduino. The hardware is basically a fancy breakout board for an Atmega microcontroller, with all the input/output pins and power ports you need to get started right away. The software half, the Arduino IDE (Integrated Development Environment), is free to download and super easy to learn, even if you don’t know programming. There are tons of examples built into the software download, and the open source-ness of the project has encouraged a huge fanbase, with tons of loyal users. This means lots of ideas, easy troubleshooting, and great support. The newest version, Arduino Uno, was just released this September at World Maker Faire NY along with a software update — this is what years of open source evolution has made possible!

Okay, back to penguins, I mean robots. As someone who had a penguin movie marathon (March of the Penguins and Happy Feet) not too long ago, I have a soft spot for anything that speaks Penguish. This particularly pink penguin is also an interactive robotic toy. The mother penguin comes with one baby but reacts to each of her four babies differently by communicating through infrared sensors And she can waddle, flap her wings, talk, and play games. The baby, besides just being cute, acts as a remote control for mom. The ads and pink-ness are obviously marketed towards little girls, but I’d say the gender-neutral appeal of penguin awesomeness can overcome that.

Need someone — er — something to help clean up after the extra holiday traffic? Robotic vacuum cleaner here, at your service. Whether you need to vacuum carpets, wash floors, clean your shop, or even your pool or gutters, iRobot has a robotic assistant for all your needs. While none of them quite live up to Rosy on The Jetsons, they are getting closer every day. And with plenty of Roomba hacking resources out there, you can easily use it as a mobile robot base to build one yourself.

This solar powered robotic puppy toy is just one of the configurations you can make with the 6-in-1 Educational Solar Robotic Kit. There are 21 snap together parts that can also build a car and a boat, among other things. In each case, the ‘bot will get power from the solar panel to run a motor directly — no batteries required! Solar power is really fun and a great way to learn about energy. You just need to shine a light on the solar powered bot pup to get it to wiggle its tail and “walk” next to you.

In the Maker Shed:

*Orders placed after these dates using these shipping methods may arrive on time; however, the dates listed are what we consider likely “safe dates.”

United States Postal Service (USPS):
Due to the high volume of mail that the postal service deals with around the holidays, please order by Dec 15 if you intend to select this method. However, we have had increased reports of packages sent via USPS lost or delayed in transit during this high-volume period. Since we do not replace or refund any order placed using this shipping method, we strongly encourage you not to use this method in December.

Dustyn Roberts is a traditionally-trained engineer with non-traditional ideas about how engineering can be taught. She founded Dustyn Robots in 2006 and continues to engage in consulting work, ranging from gait analysis to designing guided parachute systems. In 2007, she developed a course for NYU’s Interactive Telecommunications Program (ITP) called Mechanisms and Things That Move that led to writing a book called Making Things Move: DIY Mechanisms for Inventors, Hobbyists, and Artists, that was just released. She holds a BS in Mechanical and Biomedical Engineering from Carnegie Mellon University, an MS in Biomechanics & Movement Science from the University of Delaware, and is currently pursuing a PhD in Mechanical Engineering at NYU-Poly. Media coverage of her work has appeared in Time Out New York, IEEE Spectrum, and other local organizations. She lives in New York City with her partner, Lorena, and cat, Simba. 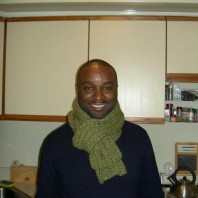