For this episode of “Tiny Yellow House” for Make Magazine, host Derek “Deek” Diedricksen pulls another idea from his book Humble Homes, Simple Shacks. This time, its an easy wooden boat made from little more than one sheet of plywood.

Check out all the episodes of Tiny Yellow House. 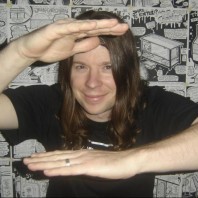 Musically, having toured the US a few times in the past (Rochester NY's "Rail"), both in bands, and managerially (Boston's "Superkollider"), he now plays drums in the Tribute act Age Against The Machine (www.bostonrage.com), which doubles as the original act "Any Given Enemy". They've recorded and been involved with the WWE, ECW, The Cartoon Network's "G.I. Joe", Video Games, Indie Movies, and Boston Bruins NHL broadcasts. In January of 2009, their recording of WWE Wrestler Jack Swagger's arena and television entrance theme "Get On Your Knees" was selected by Columbia Records to be part of the cd "WWE: The Voices. Volume 9". The cd debuted on the worldwide Billboard Top 200 charts as the Number Eleven best-selling cd on the entire planet. It also debuted as the Number One selling Cd soundtrack on the globe, and stayed in the charts for close to a month.

Derek is also an Eagle Scout (MADISON CT's Troop 491), and credit's the Scouts with further strengthening his love of the outdoors, camping, conservation, and carpentry. He comes from a large family of Scouts, as his cousins Neil and Kurt Malek, also attained the Eagle Rank, and his Brother Dustin, the rank of Life.

Derek currently lives in the small Massachusetts town of Stoughton, with his wife, Elizabeth, and his two children, Jonas and Alexandra (and his dog Orzo), ten miles or so outside of downtown Boston. He longs to move, full time, to the woods of Vermont to focus on growing a beard, and losing his teeth.