Brick Challenge: Stop Planning That Big Project, Just Do It!

What are you waiting for? Every one of you reading this has a big idea floating around in your head that you want to realize. I won’t sugar coat it, projects aren’t easy to start and they’re often harder to finish. What will encourage you to just do it? With Maker Faires happening around the US and the world, you have a platform to show off your idea. Let that be your motivation. You can do it. I did.

The 3rd Annual Detroit Maker Faire wrapped this past weekend with an amazing turnout. Over 400 makers and what I’m sure was record breaking attendance. I was very lucky to be accepted with my big project: The Brick Challenge Game Show.

For a number of years, I had a crazy dream of running a Lego game show and gear it toward AFOL (Adult Fans of Lego). This marinated in my head for a while until I was given the opportunity to host the show at a local sci-fi convention. Producing a game show, much less any type of show, is not a skill in my repertoire.

Like any new project, I scoured the internet for articles on running a game show, producing a web show, and building a TV studio set. It was a lot of hard work but the massive selection of tools at i3 Detroit was a huge help for the set. My extended network of friends and family helped fill in the holes for what I couldn’t find on the web. I knew that a buzzer system would make the game more exciting but we couldn’t get it finished in the first performance. The same goes for having a scoreboard. There is a lot to do in putting on a show.

With the basic bugs worked out, Maker Faire Detroit allowed us to polish the show and add a lot more of the elements we wanted. I found the specialists at my local hackerspace to build the components I needed to make the project bigger.  Roger Slykhouse developed the Arudino coding for the buzzer hardware along with Brad McMahon making the PHP front end for the amazing scoreboards.  Friends volunteered for stage hands, costuming, graphics, and audio.  I even got my future father-in-law to help with lighting.

The first iteration of the show had very limited prizes.  Who better to provide prizing than Lego?  I put together a one-page summary and just started emailing Lego representatives until someone listened.  Eventually, I found someone and was happy to receive some great donations.

We geared the show to adults and older kids for the first performance.  However, Maker Faire had more kids so we alternated our performances.  The kids ones were way cooler and you could see they got so much more out of it.

I had a blast bringing my big idea to life. What not do the same with yours? Use the motivation of a deadline for a Maker Faire, art festival, high school event, or college exhibition to focus you. Just do it! Brainstorm and get building. Recruit family and friends to help, reach out to local companies for a sponsorship, and read all the articles you can find on the web. The goal of “super-sizing” your projects is within reach. Try it. If you fail with your first execution like we did, learn from it and try again. 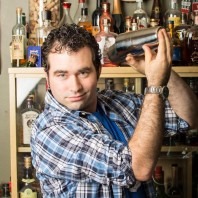