Friday night kicked off the #hackPHX Arduino hackathon at HeatSync Labs, the Phoenix area hackerspace. Everyone gathered to form 10 teams that included one Arduino newbie, one veteran, and one entrant with “hackerspace” skills (3D printing lasering welding sewing, whatever). They would have use of the entire hackerspace, an on-site designer from sponsor Cynergy, and whatever they could find at local hardware stores. Oh, and one more thing, they had to use our secret ingredient: The Shieldbot from SeeedStudios, developed by Colin Ho is a shield robot for Arduino that has five reflectance sensors, two DC motors and a 3.7V lion battery.

Teams were instructed to think outside the box, though. It was an Arduino hackathon with a robot for an ingredient, but we didn’t want to see 10 battlebots or line followers, nor did we care to see teams fighting for a 10 percent performance increase over their competitors code.

The event took the honor of being the first hackathon to be livestreamed, sportscaster-style via Allons-y and an all-volunteer video crew. If you missed the broadcast we are hard at work editing now so expect an update soon! I hope we inspire others to share the energy of the hackathon experience.

Prescott, Bruce, and Jon created a truly awesome, yet incredibly simple, working clock. The wheels turn, one forward and one reverse, spinning the reflectance sensors around the wheel indicating the minutes. Upon the hour mark the bot drives forward and advances the linear slide to indicate hours. Extra credit for the free linear rails made out of laser cut scrap and cellophane tape!

George, Kevin, and Rob created beautifully designed, though not quite finished, 2 player heads up Simon clone. The bot plays out a tune with lights and you use the laser-cut puck, complete with Braille so even the sight impaired can play, to mark the tones on the whiteboard. The Shieldbot then drives forward and uses the sensors to see if you’ve marked correctly. You want to get more right answers than your opponent so the bot drives towards their goal.

Honorable mentions were a paper tape music box, a device to randomly deposit either chicken poop OR money into your hand, and an eyeball that followed you around the room.  See them all and get links to the design files, pictures, and more at the event page. 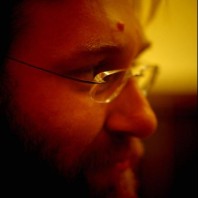