Last week I had the opportunity to attend and speak at Smart Fabrics 2013 in San Francisco. Smart Fabrics is the most interdisciplinary conference I’ve been to in a while. As Stacey Burr (member of the conference advisory board and VP of adidas Wearable Sports Electronics) said in her opening address, topics ranged from “bras to tanks and DARPA to DIY.”  In the crowd were CEOs, students, textiles and PCB manufacturers, artists, fashion designers, material scientists, “integraters”, consultants, and branders. It reminded me of the mix that we’ve been aspiring to achieve locally at the Toronto Wearables Meetup.

There was a great number of makers, writers, and educators who are active in making the field of wearable technology more accessible to creative types. At a typical lunch table you’d find a group like Alison Lewis (author of “Switch Craft”), Valerie Lamontagne (of 3lectromode), Syuzi Pakhchyan (of fashioningtech.com), and Dia Campell (E-textiles coordinator for Sparkfun Electronics). Also in attendance were Sabine Seymour (author of “Fashionable Technology” and “Functional Aesthetics”), Joanna Berzowska (of XS labs at Concordia), Marguerita Benitez (of “Osloom” and other projects), Francine Gemprele (co-author of “Design for Wearability”), and others.

Beyond the dense array of talks, one of my favorite parts of the conference was connecting with materials manufacturers. I had a nice chat with Tom Lloyd from Bekaert about coated and insulated conductive threads. I’m excited about the possibility of these materials becoming available in smaller quantities though there are still some challenges to consider in terms of how to strip the thread, how to connect to it properly, and how to sew with it.

Express Circuits Group had an assortment of flexible and stretchable printed circuit boards on display – far more body-friendly than traditional rigid PCBs. Pictured below is Sparkfun’s design for the Lilypad Arduino Simple on a flexible PCB, reminiscent of Leah Buechley’s early Lilypad designs.

Reception attendees were encouraged to wear and share their own prototypes and projects. I brought along a set of Nudgeables to pass around which proved to be quite fun as a method of backchannel communication in the cocktail party-like environment. One of the favorite things I saw was an embroidered LED textile sample book from Forster Rohner, pictured below.

Across the conference activities there was a general acknowledgement that the topic areas being explored were a combination of the very old and very new.

“I think all fabrics are smart,” said Dr. Jamshid Avloni, President & CEO of Eeonyx (a conductive textile manufacturer). “They protect us from heat, cold, and injury and have for thousands of years”.

Amar Kendale of MC10 make the point that while we’ve been quite successful in the miniaturization, we have a lot of work ahead of us in terms of the development of appropriate form factors for wearable technology. He also stressed the importance of good data rather than big data.

Beyond technical challenges, the common issues identified by the group within the realm of emerging wearable technologies were privacy, technology inhibiting social interactions, and technology being applied in ways that lack meaning. It’ll be interesting to see how we tackle these challenges in the coming years.

Kate Hartman is an artist, technologist, and educator whose work spans the fields of physical computing, wearable electronics, and conceptual art. She is the co-creator of Botanicalls, a system that lets thirsty plants place phone calls for human help, and the Lilypad XBee, a sewable radio transceiver that allows your clothing to communicate. Her work has been exhibited internationally and featured by the New York Times, BBC, CBC, NPR, in books such as “Fashionable Technology” and “Art Science Now”. She was a speaker at TED 2011 and her work is included in the permanent collection of the Museum of Modern Art in New York. Hartman is based in Toronto at OCAD University where she is the Assistant Professor of Wearable & Mobile Technology and Director of the Social Body Lab. She is also the director of ITP Camp, a summer program at ITP/NYU. 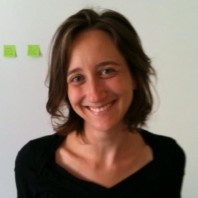 Kate Hartman is an associate professor at OCAD University in Toronto where she leads a research and development team dedicated to exploring body-centric technologies in the social context.