This weekend I wanted to make some book ends so that I don’t have to stack books on my desk. This is a few hours later. Six of the twelve hours making this were spent trying and failing to cut square holes accurately for the mortise and tenon joints. The back of the tenon shows with my design, so any gaps would be visible. The trick ended up being to mark the hole out with a razor blade, then patiently drilling large straight holes. I learned this by marking the hole with a broken pencil and impatiently drilling small holes. That didn’t turn out so well. I then used a coping saw to remove the bulk of the remaining material and then did final fitting by carefully pushing a sharp chisel into the hole. There are attachments that convert a drill press into a mortise machine, but I’ve heard mixed reviews about them.

The wood is Osage Orange. It’s a domestic wood that originated in Texas and was transplanted throughout the rest of the United States; usually as a wind break. The fruit it produces is spherical, about the size of an orange, and green. It smells like citrus but isn’t edible except by some animals. The juice produced by the fruit is a natural bug repellent. For this reason, when I see them in the woods I’ll usually throw one in my pack. This study even claims it’s more effective than DEET. This was also the wood of choice for bow making by Native American bowyers. It has excellent compression and tensile strengths. The downside is that it’s difficult to work with and sections that have enough straight grain to make a bow with are relatively rare. I found this board at a local hard woods retailer. When I saw the knot hole I thought it would make an interesting project and bought it on a whim. I think the knot hole looks like a leaf. This project is a lighter color now, but after a few years of exposure to sunlight from a window it will mature into a dark burnt orange. On that journey it will pass through the electromagnetic spectrum of a few of my favorite colors.

The joints are mechanical. They don’t need glue to hold together. I cut into the end of the tenon before placing it in the hole and then pounded a shim that I made from a darker wood (zebra wood) into the cut. This type of joinery can sometimes be found on very old furniture. I’m not sure if it’s because it was a common technique or if it’s because furniture made this way lasted longer. Probably both. Natural selection would tend to favour furniture that holds together after the glue ages enough to be ineffective. Especially given the performance characteristics of early glues. Most glues used to be made from animal skins boiled down; horses being the most famous example and salmon skins probably being the most effective. Joinery depending on these glues could be taken apart by heating or immersion in water.

Mechanical joinery done by early furniture makers has been interesting to me for a while. I love seeing old pieces of furniture that employ this and I try to imagine if the creator re-invented the technique on their own, studied under a master, or learned of it while chatting somebody up at the local general store, church, or saloon. We take information for granted now, but the finer points of engineering weren’t always so available to us.

I like that the detailed joinery and knot hole differentiate this piece from something that could be just be purchased. There’s no mistaking this as hand-made.

The book supports slide independently and rely on just friction to stay in place. The gap between them is 3 inches and the platform has an overall width of 6 inches. This is small enough to hold the smallest book in my desktop library, my regular expressions reference, and wide enough to stabalize the biggest book that would sit on my desk, Edward Tufte’s Beautiful Evidence. The design was inspired by this video by Steve Ramsey who posts weekly on youtube as Wood Working for Mere Mortals. The various curves were traced from French Curve templates I bought at a local art store. Marc Spagnuolo on The Wood Whisperer uses this trick to make some nice looking projects. 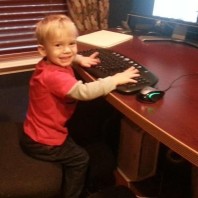