Sometimes even famous inventors come up with ideas that don’t turn out like they expected. Samuel Morse’s first telegraph patented in 1840 was much more complex than the simple key that became common. The original device didn’t require the sender to know a special code, they simply built messages from pre-made letters and fed them through the machine.

In this episode of Make: Inventions I build Morse’s original automated transmitter as well as a gravity-driven receiver that records Morse coded message to paper.

See all projects in the series here. 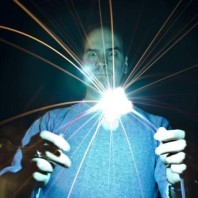