On a Roll: Lego as Muse

I grew up in the late 70s, early 80s and my brother and I had pretty much just one thing on our wish list… Lego. We didn’t have a ton of it, but a good sized bag of mixed sets and among those my favorite: the Lego space cruiser.

The space Lego and the NASA space shuttle became a fused memory for me. I read about the shuttle and I saw it on TV and I knew what they tried to do because I built the same thing at home. I knew the astronauts needed their suits and helmets; that’s what my astronauts had. Both the astronauts and the space Lego minifigs became my heroes. The symbols of the future things to come, of doing amazing, impossible things.

We didn’t keep the Lego, but a few years ago my brother started to buy and collect some of the sets we had as kids and he got me back into it. I started my own little collection of space minifigs. This led to a lot of photos and doodles of mini figs and later to the drawing I’ve been using for the posters and on the hardwood longboard skateboards I build.

I made this custom ash hardwood board for a client in California who ordered a 33″ longboard for her son.

1. Started out with tracing a photo and made this vector drawing in illustrator 2. I taped a paper printout on top of some adhesive stencil film that I bought at a craft store and used a sharp paper knife to cut out the shape.

3. I painted the board with blue water based acrylic paint and let it dry for a few minutes.

4.I Removed the tape and stencil film. 5. Hand painted the the little dude with white water based acrylic paint.

Done! My memory and love of Lego lives on. 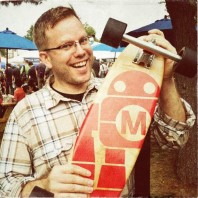 Andreas Ekberg is a freelance graphic designer, doodler, longboard builder, an Etsy shop owner, and a true believer in happiness by making. His current work can be viewed on https://www.facebook.com/HappyCloudCruiser