Stopp Family, the Stockholm production company I work for, and the ad agency Åkestam Holst joined forces to modify of one of Clear Channel’s Play screens in the Stockholm subway. The mission was to make it look like the model’s hair on the screen was caught by the turbulence from the train arriving at the platform.

To do this we needed to build a device that could be calibrated to sense the arrival of the train and not react to passing passengers. After researching possible solutions like sound detection and wind sensors we settled on measuring the distance using an ultrasonic sensor.

One of the challenges was to know when to play the video. We knew that the distance when the train was on the platform was about 4 meters and when there was no train the distance was about 7 meters. To prevent false positives we set up some rules for the video to be triggered to play. The distance had to be between 3.9 and 4.1 meters, and after the video was played the client had to get three readings with a distance greater than 7 meters before it could be triggered to play again. Those two rules prevented that the same train could trigger the video more than once, and prevented the video from being triggered by people walking by.

Being able to extend existing and create new technical solutions lets us define new interactive platforms and rather than changing ads to fit the technology we can now adapt technology to fit the creative ideas within advertising. 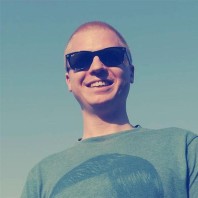