Little less than a year ago I launched a small electronics company with the goal of turning a lifelong hobby into a for-profit business. For those who know me personally, this represented quite an amusing turn of events, as up until then I had always been quite adamant against the entrepreneur’s lifestyle.

I grew up in Venezuela, a country where purchasing power is relatively low for the middle class.  This meant that I was often surrounded by would-be entrepreneurs who were always trying to find new ways of making an extra  Bolivar.  I found such fixation irritating, and quickly developed a strong aversion to it.  Retrospectively, however, I think that witnessing some of the self-employment benefits drove — in no small part — my interest towards an academic career.

As I saw it (perhaps naïvely), running an academic lab would provide the infrastructure for me not to worry about the nitty-gritty operational side of a business, while still giving me the flexibility of working my own hours and pursuing my own projects. It was in college, where I formally came across the concepts of making and DIY at our IEEE Student Chapter. Up until then, my extra-curricular, hands-on experience with electronics were limited to frequent-but-unsuccessful teardowns of numerous household devices in attempts to understand their operation.  My interest in hardware electronics peaked after finding two wonderful resources: Limor Fried’s wonderful electronics tutorials, and also the AVR Freaks forum.  Never would I have imagined that some eight years later, I’d be building a business based on what I began to explore in those early days.

The decisive moment for entrepreneurship came during grad school, where I learned, somewhat prematurely, that all things must eventually come to an end (for the curious, three years into my doctoral studies my advisor switched institutions and I was unwilling to relocate).  At that point, having sampled my ideal work setting, I faced the dichotomy of a new career path: entrepreneurship vs. working for a tech giant.  Although these options weren’t mutually exclusive (a large portion of startups come to be with founders having a day job), I strongly felt that being 100% committed to Acrobotic would give it the biggest chance for survival.

Once again, I convinced myself (perhaps naïvely) that with a business-oriented co-founder, I would be able to pull it off after all. That is, enjoying the freedom of self-employment in terms of hours and scope of the work, without worrying too much about administration.  Let’s just say that I’ve often had to wear my “business hat,” although I’ve long since grown to enjoy it.

When it came to developing our initial business model, we feared having any of our self-employment freedoms curtailed. Thus, my co-founder Jakob Wilhelmus and I veered away from external funding and decided to bootstrap Acrobotic through a Kickstarter campaign. I turned to my fellow countryman and friend, Tomás Diez, with whom I’d been collaborating on a project he co-founded at Fab Lab Barcelona.  The Smart Citizen project, a wireless environmental monitoring system, seemed mature enough to be pitched for crowdfunding.  We were all somewhat nervous with the decision, so it was a big relief to see that the project was indeed funded in our 30-day campaign.

Despite facing a few of the “typical run-ins” of a hardware-based Kickstarter campaign, we’re more than happy with the overall crowdfunding experience.  The profits from the campaign allowed for a dedicated team to focus on the development of the Smart Citizen project. This meant that Acrobotic was only responsible for the distribution of the Smart Citizen hardware, which gave us some room for designing and manufacturing a variety of electronic products and kits, putting together an online store, and working towards our next Kickstarter campaign.

Although the transition was quite easy internally, the biggest challenge for the company has been exposing our expansion to the outside world.  Luckily, social platforms like MakerCon and Maker Faire have served as fantastic opportunities to both brush up on our maker business savvy, and showcase to fellow makers how we’ve grown from our relatively simpler beginnings.

I must admit that, somewhat fortunately, the biggest factor in our company’s favor has been the recent surge in the Maker Movement.  We’ve been able to find highly talented individuals with both traditional and (historically) non-traditional backgrounds, who are eager to work at a place like Acrobotic chiefly because creativity and hands-on rule supreme.  Active institutions and organizations within the Maker Movement, such as our neighboring Pasadena Community College and DIY Girls, have been invaluable resources to help us find part-time employees, student interns, and our very first artist in residence (a member of DIY Girls).

The recently renovated Fab Lab facilities at Pasadena City College are ready for training the next generation of makers!

Organizations like DIY Girls facilitate our outreach to historically underrepresented groups in the maker community, and to showcase our products at public events.

The recent surge in the Maker Movement has helped immensely our company thrive. Taking an ordinary hobby into a formal business.

We’ve also benefited indirectly from the buzz that the Maker Movement is creating, as more professional companies in the field of electronics such as Atmel, Nordic, and RF Digital start to increase their involvement in the maker community.  From a business standpoint, this has allowed us to pursue previously inexistent opportunities both for project collaborations and small-scale product distribution.

Whereas it’d be quite the stretch to call our startup venture a success just yet, it makes us quite happy that we can announce one year ahead of time that we’ll make it to the two-year mark relatively unscathed.  After the exposure at Maker Faire, we have a couple hundred people signed up on our interest list for our upcoming Kickstarter campaign www.plugnblink.com.

Even though we’re quite content with the current workflow, the goal for the upcoming year will be hiring our first full-time employees. This will pave the way us not to use crowdfunding as our main source of revenue, and to be more self-reliant as a business.  If you’re in New York for the World Maker Faire 2014 on September 20 and 21, be sure to stop by our booth and say hello to the team! 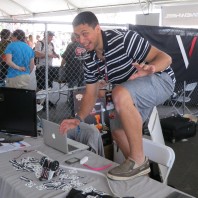