A Story of Summer Internship at Make:

My name is Pierre-Alexandre and I’m a french student.

I wanted to do a summer internship at Make:, thanks to the advice of my uncle Bertier, who organized Maker Faire Paris. I did it this last summer, and here’s how it was:
I arrived in Sebastopol on Monday 12th July.
I first thought that California is rainier and colder than I imagined.
I arrived with Sherry Huss, the cofounder of Make:, and after meeting almost every employee, who almost all said that they remembered meeting my uncle Bertier at a party, I met Sam (the intern manager) who told Sherry that he could give me some tasks to do, and especially some things to make.
So, I immediately received my first project: making a wood maze (labyrinth).

I had no clue how to do that, but the ideas came fast, and having tools and material to work well was very nice. After a year of intense studying, it felt nice to work with my hands. Then I received various projects to do, sometimes just manual work (a little cardboard derby car) or tasks requiring an initiation in electronics (Arduino theremin), and I learned a lot of various things I had never expected to learn before. This was a good surprise!
Then, I also discovered the second part of the intern’s work during summer: Maker Camp.
I had already heard Sherry talking about it, but I had never really understood what it was exactly. So, as I arrived in the camp counsellor’s room, wearing a funny yellow t-shirt, sitting in front of the webcam with Brian, I was very “impressed”. When I saw that the text I was supposed to read was short and written on a white board in front of me, and that Brian didn’t really know better than I did when exactly we were supposed to read, and also that the show was watched by a few thousands of teenagers, I started to feel more comfortable.
Despite the improvisation (which is also maybe what makes a show interesting), it was a perfect “exercise” for me to practice my english and learn
things about new makers and making techniques. But even deeper was the feeling that we did, even if it was just for a handful of teenagers, something useful that gives things to do and shows an example for young people and in a way, changes their lives a bit, giving them nice projects to make.
Finally, since the team was very nice and friendly, I quick stopped to be stressed by the camera and this work was very pleasant, allowing me to learn a lot about makers all over the US and the UK.

This internship was definitely an opportunity to take a break, compared with the rhythm my current studies require. Not a break in the sense that I hadn’t a lot to do, but because what I had to do was completely different from what I usually do during the school year.
However, even if the handwork was a nice distraction, it wasn’t the most important thing I learned there. It’s true that I now know how to use a table saw and I learned the English names of a lot of tools. I also learned some basics of Arduino programing, or how to use a 3D printer, and these are very interesting things to know, in the beginning of the 21st century.
But I mostly discovered a company where people just seem to play and to have lot of fun at work. They also try to play a role in education, and to change with small means the consumption habits and the summer of thousands of children.
So I learned that it’s possible to work, play and act for a good cause at the same time.

0 thoughts on “A Story of Summer Internship at Make:” 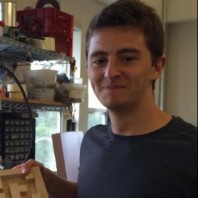 Pierre-Alexandre originally comes from Burgundy, France’s best wine region, and has always been interested in wine and gastronomy and used to work in a restaurant. He is also interested in art, studied it one year, and he likes to make stuff. Since he didn’t want to choose between his hobbies, he now studies business at the University of Strasbourg, and is looking for further original experiments.