Rockets, Robots, and Board Games: An Interview with Sherman Lam

It’s rare for a full-time engineering student to have the time to make personal projects on the side. However, Sherman Lam, an engineer at Harvey Mudd College, typically juggles six rigorous courses, a research position, and the task of running several clubs, all the while still finding time to build some awesome stuff. How is this possible? The answer is a deadly combination of engineering skills, determination, and a love of making.

Lam is a brilliant roboticist, and aspires to work in the field of robotic space exploration. He is specifically interested in designing robots for missions in increasingly remote and challenging environments. During the school year, Lam works for Harvey Mudd’s autonomous vehicle research group, and he is currently an intern at NASA’s Jet Propulsion Laboratory, working with the Extreme Environment Robotics Group. There’s no doubt he will be at the cutting edge of space exploration, pushing the boundaries of whats possible.

Over the years Lam has developed an impressive portfolio of projects and skills. Some of his favorite projects are shown below.

On the topic of robots for exploring extreme environments, Lam has been developing this robot to explore Mars!

Lam built this robot for the autonomous vehicle research lab. The goal was to develop a proof-of-concept for a robot capable of exploring Martian lava tubes. This type of exploration requires resistance to large drops and impacts, which is why the robot has such an unconventional shape:

“The shape of this robot is called a tensegrity. A tensegrity is a special geometry which consists of elements experiencing either perfect tension or perfect compression. These properties make it elastic and resilient to impacts. Thus, the bulk of this robot is a 30-strut tensegrity ball … this means there are 30 wooden dowels, and they are all under compression. In the final version, the wooden dowels will be replaced by carbon fiber tubes, and the string will be replaced by steel cable.”

To move around, the robot uses motors to shift internal weights, thereby shifting its center of mass. This allows the robot to move around in any desired horizontal direction.

A couple years ago, a hands-on engineering course tasked Lam with building a rocket to collect atmospheric data. These rockets were built from kits, were fairly low-tech, and used materials such as plastic and cardboard. Lam took it to the next level and built his own custom rocket the following summer using aluminum and composites.

“This rocket flies on J motors, is 3″ in diameter, and 65” tall. The entire rocket was custom designed using OpenRocket and Solidworks. The airframe is made with a high strength tube known as “Blue Tube”. The fins are made of fiberglass and carbon fiber. Other materials found throughout the rocket include wood, aluminum, fiberglass, and kevlar. Like most kit rockets, this deploys its parachute using a fixed delay grain and black powder charge. However, I am upgrading the rocket to detect its apogee based on GPS and IMU data. This data is interpreted by an onboard Raspberry Pi running the Robot Operating System (ROS). Once apogee is detected, the Raspberry Pi will trigger the parachutes to deploy. This method allows the rocket to reach the maximum altitude possible.”

If you’ve ever flown model rockets from a typically hobby shop, then you’ve probably used size A, B, and C motors. Lam’s rocket uses a J motor, which is over 200 times more powerful than that!

Settlers of Catan Game Board

Although Lam spends most of his time working with robots and other technical projects, he also has a knack for crafts. Check out this custom Settlers of Catan game board he made.

“My brother and I have always wanted to play Settlers of Catan, but never wanted to purchase the official game board. For a while, we printed the pieces on paper but the quality of the board was pretty bad. So, I decided to surprise my brother on his birthday with a custom laser-cut Settlers of Catan set.”

Lam designed the game pieces in Solidworks and cut them on an Epilog laser cutter. The only pieces that he didn’t custom make were the dice and cards. To keep the set together, Lam also designed and laser cut a wooden box. Lam adds “we finished the board with shellac and painted each player’s roads, settlements, and cities. It turned out pretty great.”

As one of Lam’s peers, I’ve been fortunate enough to work with him on several projects, and it’s been great to have a friend who shares the same love of making things.

“I love the whole process of conceptualization, design, and fabrication. Being able to transform a dream into something tangible and functional (despite all the unforeseen problems that manage to interrupt the project along the way). It’s very empowering, educational, and most importantly — fun!”

1 thought on “Rockets, Robots, and Board Games: An Interview with Sherman Lam” 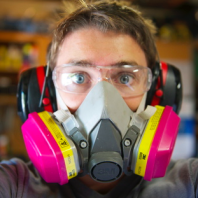