Pluck Your Turkey with a Washing Machine and Old Truck

Livestock should never be an impulse buy, but that’s how my husband and I ended up with a flock of turkeys. We were at the feed store, buying cracked corn for our chickens, and there they were.

Turkeys are cute for exactly four days: the first four. On the fifth, they start getting a mangy, suspicious look, and the cuteness fades fast. Feed stores know this, and they put the fluffy baby turkey poults near their check-out counters to tempt the likes of us.

You don’t start thinking about plucking them until months later.

Before we faced the prospect of plucking our turkey, we had plucked only one bird. There was an incident involving a wild turkey and a car, which I won’t go into. But that one bird gave my husband, Kevin, ample motivation to automate the process.

There was to be a plucker in our future.

As nobody likes plucking turkeys by hand, home-made pluckers abound. Most are a rotating drum with black rubber fingers either on the inside (you put the bird in the drum) or the outside (you hold the bird up to the fingers). Either way, as the carcass passes over the surface, the feathers adhere to the fingers and are pulled off the bird.

Kevin went with the fingers-on-the-outside kind.

If you think “rotating drum” and you don’t immediately think “washing machine,” turn in your DIY card. Kevin found a free washer on Craigslist (it worked!), ordered the fingers ($39.99 for a package of 70), and we rolled up our sleeves.

Step one was removing the housing from the washer, and Kevin used the method he always uses when he has to accomplish something by brute force: he ties it to a truck.

Who needs screwdrivers when you have a Land Rover?

I’m a little squeamish about tying things to trucks. The Land Rover’s transmission had barely survived Kevin’s attempt to move a giant bag of sand (I’m talking six feet by eight) that had frozen to the ground (don’t ask). And then there was the stump-removal exercise that so very nearly ended in tears. We hadn’t yet had an out-and-out disaster, but it was only a matter of time.

He opened a seam in the washing machine’s housing with a grinder, tied one side to the garage and the other to the Rover. “Either the housing will open or the garage will fall down,” Kevin told me as he slipped the truck into gear.

It was touch-and-go for a moment, but then the housing opened and I breathed again.

The housing went to the dump. Kevin drilled holes in the drum, and inserted the fingers. Everything was going swimmingly until it came to attach the on/off switch. Turns out the wiring diagram was on the inside of the housing. Which was at the dump. Although Kevin has basic electrical skills, he wasn’t inclined to try wiring without a net, so he simply left the washing machine console attached to the drum.

There’s a certain down-home charm in dialing your turkey plucker to the spin cycle.

On the Sunday before Thanksgiving last year, Kevin mounted the plucker outside and set up a tarp behind it to catch the feathers. Ideally, you mount a fingers-on-the-outside plucker horizontally, so the feathers collect underneath. Unfortunately, our washer was a top-loader, and a drum designed to rotate around a vertical axis doesn’t take work well when moved to the horizontal axis. Vertical would have to do.

Kevin went into the pen and picked up the nearest turkey. Beta, his name was. I will digress here from the plucker story to say that although we play fast and loose with hardware hacks at our house, we take humane slaughter very seriously. We kill birds by putting them upside down in a cone with an open tip, and opening a blood vessel in their neck so they bleed out. Beta went into the Cone of Silence, and was dead inside a minute. I dunked the carcass in scalding water to loosen the feathers. And then came the moment of truth.

Kevin turned the plucker to ‘spin,’ and gave the drum a push. When it got going, he held the bird against the fingers. And, miraculously, the feathers began to fly, straight into the tarp.

It was going fine! Better than fine, even. And our friend Amanda was there filming, so we had proof.

Then I smelled smoke.

I looked down at the motor. Sure enough, it was smoking. And then I looked again. There was an actual, genuine flame, licking out from underneath.

“Yeah?” Kevin said, holding a leg up to the machine.

My husband has many fine qualities. He is smart and funny, fearless and true. He is kind and curious and well-informed. He always does the right thing. But safety-consciousness doesn’t top his list of personal assets.

When I told him the machine he was using was going up in flames, what he said was: “Naaaah.”

“It’s just a little smoke.” Kevin, intent on his plucking, didn’t even look.

He didn’t even look.

And then the machine shut down.

“No it isn’t,” he answered, without missing a beat. “The spin cycle’s over.”

He tried to restart it. No luck.

“It has to cool down,” he explained.

It takes more than destruction by fire to defeat my husband, and he was designing Plucker 2.0 before 1.0 had been laid to rest. And 2.0, a simple length of 3-inch PVC with the fingers attached, spinning around an axle that fits into our super-duper Milwaukee right-angle drill, works like a dream.

It works like a dream, but there’s no romance in it. I have a rosy-hued nostalgia for the washer version, and I think of it with fondness every time I turn my washer to ‘spin.’ 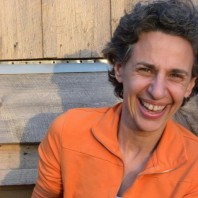 Tamar Haspel is a journalist who’s been on the food and science beat for the best part of two decades. She writes an award-winning monthly Washington Post column, Unearthed, which covers food supply issues: biotech, pesticides, food additives, antibiotics, organics, nutrition, and food policy. Haspel is knee-deep in the public food conversation, and speaks frequently at venues where the debates about our food supply play out, including the National Academy of Sciences, food- and ag-related conferences, and SXSW. She and her husband raise their own chickens, catch their own fish, grow their own tomatoes, hunt their own venison, and generally try to stay connected to the idea that food has to come from somewhere.