Maker Faire is the Greatest Show and Tell on Earth, and each Faire’s location sets a different stage. Like Maker Faires across the world, the Boston Mini Maker Faire showcases a diverse group of makers, young and old, from the Greater Boston Area and beyond. But, because Boston Mini Maker Faire is hosted by the Boston Children’s Museum, one unique group of makers is particularly important to us: our young makers — people under 18 who are passionate about science, art, technology, and making.

Here are the young makers you can meet at the Boston Mini Maker Faire on September 17th!

Meet The Parity Bits, an all-girls high school robotics team from Lexington, MA. Their robot will be available for anyone to test drive at Boston Mini Maker Faire. The team says, “We strive to inspire girls in our community to join STEM!”

Enis Erbatur, a middle schooler from Newton, MA, built a hydraulic arm by himself that uses syringes, tubes, and wood. Join Enis at Boston Mini Maker Faire to explore the engineering behind hydraulics.

FIRST Robotics Team #125, NUTRONs, has been inspiring students all across Boston to pursue their passions in science and technology. At the Boston Mini Maker Faire, you can see what the team has built over the past 20 years, and meet their 2016 and 2017 competition robots!

Walnut Hill School for the Arts

For the students and staff of the Walnut Hill School for the Arts in Natick, MA, making stuff as a team is an opportunity to bring people closer together. At the Boston Mini Maker Faire, students of ART FOR CHANGE will create quick, quirky, and original works of art that are inspired by the stories that are shared with them at the Faire.

A high school robotics team out of Lexington, MA, 2 Bits and a Byte will be bringing their robot, Fido, to the Boston Mini Maker Faire. Built for the FIRST Tech Challenge competition, Fido can shoot and lift balls of various sizes.

The Flagship Clubhouse, based at the Museum of Science in Boston, is a space for kids and teens to develop their own STEAM projects and explore other creative technologies. At the Boston Mini Maker Faire, you can see all of the cool and creative projects that the Clubhouse teens made over the summer.

Melrose VEXIQ Robotics Team is an award-winning middle school robotics team from Melrose, MA. They have competed in the VEX Robotics world championship four years in a row! At the Boston Mini Maker Faire, you can see one of their robots in action, and even take it for a test drive!

Christian Bunge of Cohasset, MA assembled a LEGO Robot that can solve any Rubik’s Cube puzzle. At Boston Mini Maker Faire, Christian invites visitors to jumble the Rubik’s Cube and watch as the robot completes the challenge.

As a local skateboarding company out of Boston, MSBoards makes and designs longboards, E-boards, and cruisers. At the Boston Mini Maker Faire, you can take a test ride on some of their designs!

Come meet 13-year-old Max Ash, the Chief Creator of MAX’IS Creations and dyslexic inventor of The Mug With A Hoop! Learn how Max and his family turned his 2nd grade art project into a best-selling product.

Based out of Lexington, MA, the young makers of the Firefly Project have created a wireless synchronization network that uses Arduino. The design was inspired by the group dynamics of fireflies. At the Faire, you can put on a “firefly hat” and test out the synchronous network yourself!

Meet Sam Hoyt, an 8th grader at the West Tisbury School in Massachusetts. Sam is an amputee with an interest in prosthetics. Using open source prosthetic limb designs that he found online, he 3D prints hands and arms for those in need. Sam will bring some of his sample projects for attendees to try on at the Faire.

You can meet these young makers, and other fabulous creators from across New England, at the Boston Children’s Museum on Sunday, September 17th, 2017. To learn more about the Faire, and purchase tickets, head to their website. 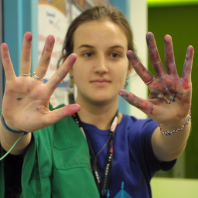 Ivy Bardaglio is part of the Maker Faire team at Boston Children’s Museum. She loves to do big, messy projects with kids and families. Outside of work, she is an avid puzzler, bookworm, and recycler. 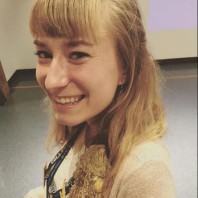 Leah Swinson was a STEAM Specialist at Boston Children's Museum until September 2017. At BCM, she enjoyed creating colorful, collaborative art and science activities. She is a graduate of Connecticut College and the last thing she made was coffee.