Welcome to the assembly instructions for the Maker Shed 3x3x3 LED Cube Arduino Shield Kit, originally created by Joey Hudy. With a bit of soldering, this fun kit shouldn’t take you more than an hour or two to complete. Read on for the full instructions.

Check out this video of Shed customer Tim Keeley’s 3x3x3 Cube in action! His code is available here.

These are the parts you should’ve received with your kit: Next, solder the other nine of the remaining transistors into place. These are labeled P1-P9. Next are the resistors – solder them where they belong (polarity doesn’t matter here). Now comes the trickiest part of the build: soldering the LEDs together. Basically, you need to bend all the negative (shorter) legs of the LEDs into a square and solder them together, to form three sets of nine.

Use the included lasercut guide to make sure the LEDs stay in the right position as you solder them together.

Once you have three grids of nine LEDs each, trim off the excess leads. Now it’s time to solder the three squares (of nine LEDs each) to each other. I like using a pair of helping hands to hold each row above the previous while soldering the positive, straight legs of the LEDs to each other.

The bottom square of LEDs’ positive legs should be soldered into the holes in the PCB, as noted in the second photo of this step.

The three stripped wires that connect each row go to their respective holes on the PCB – “Plane 1” for the bottom, 2 for the middle, and 3 for the top. It doesn’t matter what part of the square you solder the wire to – just make sure it’s connected to the horizontal, or negative, legs of the LEDs.

And that’s it! Plug it into your Arduino and download some code here. 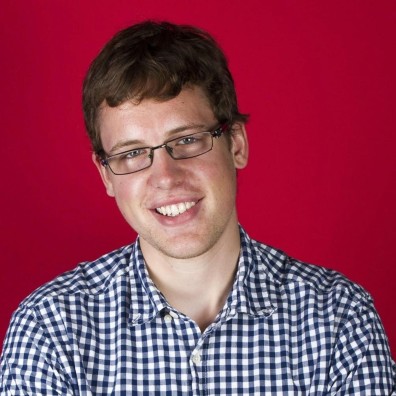 Eric is a Mechanical Engineer with interests in machining, mass manufacturing, product design and kinetic art. While not building things, he enjoys skiing, cycling, and juggling.