They fly smoother and make better videos than quads. Build the Maker Hangar Tricopter and see for yourself!

Quadcopters are a little easier to build, but tricopters have advantages that make them more exciting to fly — especially for shooting aerial video. I built my first one in 2010, inspired by David Windestal’s beautiful aerial GoPro videos. I didn’t get many flights out of that first build, but I learned a lot. After building several more, I’ve developed an affordable kit that anyone can build — the Maker Hangar Tricopter.

A tricopter’s three motors are usually separated by 120°, not 90° like a quadcopter’s. This makes them great for video because you can place the camera really close to the body and still have no propellers in view. And where quads must rely on counter-rotating propellers to handle torque and balance the aircraft, a tricopter can use identical props because it has a special servo in the back — a yaw servo — that twists the tail motor to counter torque.

Tricopters fly differently, too. With their dedicated motor for yaw (turning), they fly with more fluid, natural-looking movements — they can bank, pitch, and yaw like an airplane, but still hover like a helicopter. A quadcopter’s flight is more robotic, as the controller board calculates the precise rotation for all four motors to create the proper torque and balance to yaw the aircraft. If you let go of the stick, a quad stops turning abruptly; for video work, this can be obvious and distracting. Let go of a tricopter’s stick and the tilted tail motor takes a moment to return to a hovering position; this gives you a slow stop and even a little overshoot, as though a person were moving the camera.

Finally, tricopters are a lot of fun to fly, especially for stunts and acrobatics. The tilting motor also gives you much higher yaw speeds — that means they turn faster.

A Tricopter for Makers

The Maker Hangar Tricopter is made of wood — hackable, easy to drill and cut, and a natural absorber of vibration, the enemy of aerial video. The airframe is big, with plenty of room for large controller boards, video transmitters, drop mechanisms, or whatever you can imagine. And we widened the front arms to about 150° so our tricopter is more agile.

The kit includes a 3D-printed tail assembly and all the hardware you’ll need, plus a wire rope vibration absorber that will pretty much erase camera vibrations even if your propellers are unbalanced. A carbon-fiber hinge provides a strong, smooth connection between the tail motor and airframe.

Finally, like most tricopters, the two front arms lock in place for flight, then fold back neatly for transportation and storage.

It’s a great kit for anyone wanting to get into multicopters or aerial photography. You can also build it totally from scratch: download the PDF plans, laser cutter layouts, 3D files for printing, flight controller settings, and watch the how-to video series at makezine.com/makerhangar or in this Dropbox folder.

Sand down any burrs or splinters on the wooden parts. If you wish, paint with a couple of light coats.

Drill each front arm using the 2 templates provided: at one end for the motor mounts, and at the other end for the rotation bolts for folding the copter arms. Note that the motor template has 2 different spacing patterns; use each pattern on only one arm, so your motors will end up being mounted symmetrically.

Then mount the remaining 2 motors using the 4 round plywood motor mount pieces — the ones with the larger center holes go up against the motors — and M3×22mm bolts with washers.

Zip-tie the 2 plywood landing struts to the front arms.

Clamp the free ends of the wire ropes into the brackets on the camera tray. Make sure the camera platform faces forward and the bolt heads face outward; you’ll need access to them to adjust the tray later. Strap the battery onto the tray with the velcro strap. 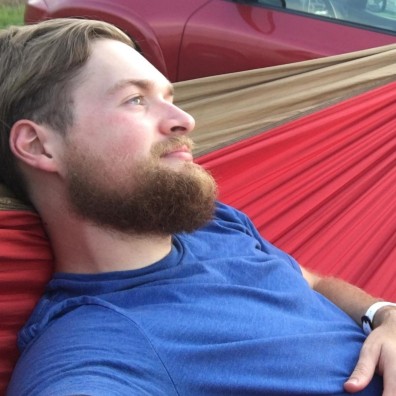 Hi! My name is Lucas Weakley. I have recently graduated from a magnet program at Forest High School called EMIT. One of the many things we did in EMIT was work on a robot that we use to compete at the FIRST Robotics Competition. EMIT also introduced me to drafting and now I am certified in AutoCAD. I have been accepted into Embry Riddle Aeronautics University and will be attending this fall. My degree will be in Aerospace Engineering (if you couldn’t have guessed) and I plan to minor in business and aircraft maintenance.