photo by Lee Meredith
Hi! This is Susan from West Coast Crafty. I’m really excited to be posting for CRAFT and covering Hello Craft‘s super-inspiring Summit of Awesome this month. Since there was so much going on (four to six stellar craft events to choose from at any one time, for three straight days), I’ve split my coverage up into thirds so I can include as much as possible! Be sure to check out the Summit of Awesome flickr pool for much, much more amazingness.
The second annual Summit (the first one was last year in Washington, DC) was held at the Kennedy School here in Portland.

The conference schedule was filled from start to finish with events, workshops, hands-on crafting, and included all kinds of thoughtful handmade extras, from custom hand-bound journals from Ex Libris Anonymous

to a lavish supply of crafty treasures to make and embellish your own nametag and 1″ buttons (not to mention all kinds of other tempting craft projects like these felt flowers!) in the Make Something Awesome area over the three days. New craft materials and how-tos were added daily, so you could always find something fresh to work on during your quiet moments.

Wednesday, the first day of the Summit, kicked off with a walking tour of The Alberta Arts District. Jolie Griffin of Handmade In Portland commented, “Our guide, Hilary of Bunny with a Toolbelt, told us the history of Alberta Street and pointed out galleries, indie shops and great places to eat. She was a wealth of knowledge and even as a native, I learned a lot. Things are growing so quickly on this street. I can’t wait to go back and slowly explore all these great new places.”

After a quick registration to choose your journal and screenprinted tote bag, everyone was invited to an open crafting session in the gym. Bettie Newell of HiP described the lively atmosphere: “When I entered the Make Something Awesome area first thing Wednesday afternoon, I immediately felt a sense of belonging. Here were my friends, my acquaintances and my inspirations all in one room, crafting it up, getting to know each other and having a great time.” More than a hundred crafters sat at tables chatting and working on projects, particularly those super-customized embellished name tags. I loved Leah Pellegrini‘s in-progress photos of making hers:

photos by Leah Pellegrini
The official welcome from the Hello Craft organizers, Kelly, Sara, Christine and Kim, included lots of cool details previewing the week ahead, and then participants headed their separate ways to workshops and craft-ons. There were so many great things going on at the same time that the biggest problem was choosing which sessions to attend and which ones you had to regretfully miss!

In the first afternoon timeslot, Christy Petterson of a bardis taught screenprinting techniques, on both handkerchiefs and clothes or fabric that participants brought in. Jena Coray of Modish took Christy’s class and said: “Not only did I learn how to get started with screenprinting and all the supplies I need, she showed us an entirely new-to-me technique to create the screened image that is not only easy, but inexpensive and something I can do right on the floor of my bathroom (well, that’s where she prints, at least!).”

photo by Kim Werker
Among the many talks offered on Wednesday afternoon was Getting Press for your Business with Kari Chapin and Christine Ernest. Jolie Griffin attended and said, “I learned some great tips and their talk has me brainstorming on how to make my website even better.”

photo by Hello Craft
Isaac Watson of I Heart Art‘s session, Connecting to Your Creative Community, was also offered Wednesday afternoon. Diane Gilleland of Craftypod commented, “This session sparked lots of discussion about how creative communities get things done and how to become part of an established group. We also talked about the Portland community and how it can sustain so many crafty activities. People in other cities were interested in bringing some of that energy to their own communities, which I think is wonderful! Really, it all starts with a few dedicated people.”

photo by Jena Coray
The Welcome Party that night included a massive crafty white elephant swap of handmade surprises. Diana Day of HiP described it beautifully: “My favorite part about the Summit – what has stayed with me after – is how quickly and generously a small community was built in the span of a few days. This was really illustrated by the white elephant game the first night. I think there were collective, even if silent, groans from many in the crowd when we saw the large circle we were to sit in and thought about the interaction, on a large scale, that such a game demands.”

photo by Hello Craft
“But by the end of the game, folks were talking who had never met and might never have found each other left to their own devices. On the last day, it was apparent, as people hugged and said their farewells, that friendships were made at the same time that information and skills were passed around and that is the impression that will stay with me for years to come.”

photo by Jena Coray
Stay tuned for lots more coverage of the next two days at the Summit! 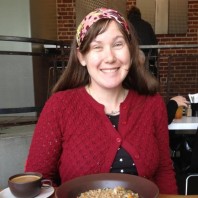 Susan Beal is a West Coast freelance writer and lover of all things crafty who lives in Portland, Oregon. She writes for Stitch, CRAFT, ReadyMade, BUST, Venus, BurdaStyle, and CraftStylish. She's the author of Bead Simple, Button It Up, Modern Log Cabin Quilting, and World of Geekcraft.