About 7 years ago I was given the honor of caring for the family violin. What I got was a neck (separated from the body), the body, and one tuning peg. This is an especially sensitive item because the name written on the inside holds the name Stradivarius, and came over with my family from France. Turns out it’s not a Stradivarius, but it’s estimated to be 100 years old. It’s also estimated to have been silent for about 80 years and no living Massie has heard it played

I investigated options to pay to have it repaired back to play grade, repaired enough to be an art piece, or just leaving it as is. It is a family heirloom so lending it out for someone to play was selfishly not attractive. Repairing with current parts would obfuscate what was part of the original and what is new. Finally, leaving busted up was just not cool.

At a later trip to the museum I saw the T-Rex had a bright white resin femur place holder unit they could get a real one. I assumed the stark contrast in color was to not confuse what was original and what was a replacement. I.D. Magazine also had an article some time ago about some Dutch students repairing damaged wood furniture with lime green plastic replacement parts inlaid with the originals.

These use cases inspired me to try replacing the parts in some type of acrylic or pop color plastic replacement.

As a Milwaukee Makerspace member I felt the best solution would be to replace all the missing pieces in 3D prints based off original parts (scanned and/or measured out). I additionally chose white cause it stood out against the dark wood.

I measured out the Tuning Peg by hand, rebuilt in SketchUp and printed to a Makerbot Replicator for first run prototypes.

Similar models of the tailpiece and the chin rest were purchased, sanded down, painted a flat brown and then scanned on a 3D scanner.

Once all pieces scans were complete, it was time to bring it all together. This was the easiest part, cause it just involved me handing someone a bag of money. Final edited STL’s were sent off to Shapeways to be printed and once returned all parts were taken to someone to be cleaned, assembled, strung and tuned.

Hang it on the wall

… till later generations wish to play it. Everything that is in place, in plastic, is able to be removed without any impact to the original device. Some day, down the line, we’ll expect to remove the plastic and replace with resonate friendly ebony and natural parts. For now it is an art piece of the visual style.

If you’re interested in more details, or finding the actual STL files for download, check out the blog entry at the Milwaukee Makerspace.

8 thoughts on “Reviving an Heirloom Violin With 3D Printing” 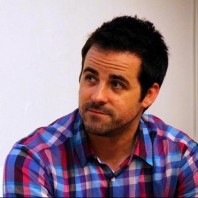