My friend Lauren of Site 3 coLaboratory was involved in a Pop-Up Shop this summer that inhabited a temporarily vacant space on Queen St. in Toronto, ON. They named this space, Site Bee, and went on to host a series of Skill Bees. These workshops were inspired by the tradition of a Quilting Bee, where people come together to learn a new skill in a social setting. You may be picturing a group of little old ladies huddled around a giant quilting frame, needles in hand. The concrete casting workshop they hosted could not be further from this. It was messy, experimental and put a modern twist on the traditional process of concrete casting.

Check out this time lapse of the Minecraft Creeper face being made.

Inspired to make your own 8-bit concrete sculpture? Head on over to HomeMade Modern for a fantastic tutorial that you can follow along with. 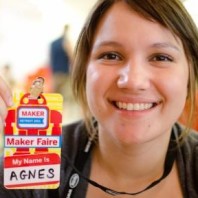 Maker Extraordinaire from Kitchener/Waterloo, Ontario. Lover of all things CNC and handmade.