Two pioneering artists, Coral Lambert and Paul Higham, will soon be embarking on a tour with their Solar Airstream Fab Lab, equipped for both 3D printing and metal casting. This modified Airstream has solar panels, a 3D scanner, two 3D printers (MakerBot and Rostock), and equipment for casting objects in iron and bronze using environmental mold making techniques.

The Solar Airstream Fab Lab is a 1960’s Airstream converted into a digital sculpture lab and research studio, harnessing solar energy via 2 x 22ft panels on the roof it is primarily a mobile studio for small scale production of art. Housing Paul Higham’s custom built rapid prototype machine where he manifests objects from data, whilst Coral Lambert works at each site developing environmental foundry processes utilizing the mobility of the studio.

This unique fab lab’s backstory may resonate with those who’ve lost a workshop or studio:

Never wanting to be without a studio again the couple bought the Airstream after Hurricane Katrina flooded and destroyed their 33,000 sq ft home studio in New Orleans. It is not only an American icon of a utopian dream, it is also the symbol of freedom, innovation and independence that comes to life.

Starting mid-October in NY, they’ll be making their way down the East Coast, arriving mid-November for a month-long Florida “Space Coast” tour. Along the way, Coral and Paul will be researching, collecting data, and scanning objects of interest. They’ll also be giving lectures, demos, and Airstream Expositions along the way. For those located along the tour path, you can inquire about arranging a visit to your school or makerspace by contacting Paul.

Follow the journey on their blog, or support their tour by purchasing a t-shirt. 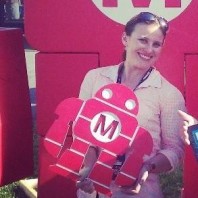 Jessica designs art, making, and STEAM experiences for learners of all ages. She's developed and produced hands-on workshops, public programs, video media, project guides, and PD resources for organizations like Maker Media, the Exploratorium, and Franconia Sculpture Park. She holds a BFA in Sculpture from RISD and an EdM from Harvard.

She's shared hands-on activities with attendees at Maker Faires since 2007.