All aboard for the Sally Cardigan KAL!

Designing and knitting the Sally Cardigan was so much fun and the results were so exactly what I’d hoped that I’m really tickled to be knitting another one.
I’m still wavering over whether to knit the all-over pattern, or give it more of a Nordic flair, with the pattern worked just at the yoke and cuffs, and stockinette elsewhere. The advantage of that version is that you can pick more jarring colors that might be a little too abrasive for the all-over pattern. Of course, it’s also handy if you have just a few balls of one color and several balls of another.
On the other hand, one of the great things about a cardigan is that you can be a little sassier than you can with a pullover. I don’t know why, but opening up the front of a sweater gives you more leeway for prints and colors. Maybe it’s the implied notion of a layer?

I’m definitely going with Sheffield again, but I need to pick my colors today! I’m considering:

or one of these, but only if I do the yoke & cuffs version:

Decisions, decisions!
While I think Sheffield’s fuzzy angora component is perfectly spot-on for a retro design (AND Sheffield is on sale this month at Webs–making the medium version under $40!), I’ve swatched several different yarns from my stash to help expand you possibilities. The gauge is given in stockinette, but it’s a good idea to work at least an unscientific pattern swatch as well, just so you know you like your color combo. And it’s always a good idea to wash a sample colorwork swatch, particularly if you’re using hand-dyed yarn.
If you’re allergic to angora but want that fuzzy feel, you can pick a blend with a bit of alpaca or cashmere–Lion Brand Cashmere blend would have a similar look. Or try a super-soft wool like Quince & Co Lark. Initially, it will have fairly crisp definition (though the plump strands will really fill in the pattern more than a basic wool like 220), but the short fibers will soften the pattern eventually, producing a similar soft effect over time (but without the angora halo) Make sure your fiber is mostly wool, though, or the end result could be very different, particularly if you choose a fiber with little memory.
Cascade 220 (100% wool) for both MC and CC, with colors reversed. A nice, high-contrast sample.

Knit Picks Merino Style (100% merino) MC with a hand-dyed 100% wool CC. This had quite a nice effect. (Merino Style is sold as a DK, but merino’s plumpness makes this work well in this worsted pattern.)

Cascade 220 (100% wool) MC and Zitron Avanti (100% superwash merino), self-striping 3-ply, as the CC. I don’t think this particular yarn has long enough stretches for a sweater, but you can get an idea of the effect of a self-striping yarn. Jojoland Rhythm is a similar yarn with a longer color run.

Valley Yarns Sheffield MC (merino/silk/angora) and Lion Brand Amazing (wool/acrylic) CC. Amazing is a fuzzy self-striping single with very long, subtle stretches of color that would make it a good CC choice–but I’d stick with a classic plied yarn for the MC so the garment maintains a bit more structure/contrast. Amazing is way too fuzzy for both colors.

Quince & Co Lark MC & CC. Another high-contrast combo. You can see how the chubby fine wool really fills in the pattern nicely.

Note: if you’re using a handspun or self-striping yarn, avoid all of the colors in your yarn. It’s tempting to choose your second yarn from the pallet of your special yarn, but if you do, you might lose your pattern to the color. If you just have flecks of second color, you should be okay, but anything longer than an inch at a stretch may cause you trouble.
In the last two samples for example, I was going to just invert the two yarns, as in the 220, Northampton & Quince & Co. samples, but I hit a section in the handspun so similar to the contrast yarn that the pattern disappeared completely, so I switched the CC to red.
Gather up your yarn and get ready to start next week! In the meantime, join the Ravelry group and cast on now! 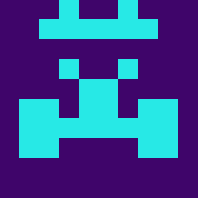