The Arduino Leonardo is one of the latest boards announced by the Arduino team at World Maker Faire. It’s not going to replace the Arduino Uno, but provide an additional alternative. It’s a lower cost Arduino board using only surface mount components and simpler circuit, and it really excites me.

Leonardo’s IC is the ATmega32u4, which has all of the features of the ATmega328, an additional 0.5k SRAM, and built-in USB support. While the chip has already been used with the Arduino IDE before (Teensyduino), this will bring full support to it in the Arduino 1.0 IDE. I haven’t had a chance to test the Leonardo with the latest Arduino IDE build, but I will write more about it once I get a chance to sit down and play with both a bit.

I really like the 32u4, as it is more easily found and less likely to have shortages like we have seen with the 328. The 32u4 is nearly the same price and has built in USB, so there’s no need for an expensive FTDI chip. By my guess, this means the Leonardo will retail for around $20-25. In the future, this will also allow for smaller Arduinos with everything needed already on-board.

The Leonardo is entirely SMD, similar to the Sparkfun Pro series, where everything but the through-hole parts are populated on the board and already soldered. Leonardo customers will have to solder their own headers and power jack. I think this decision is fine, as it reduces the costs further, and people aren’t nearly as scared of soldering as they once were. I’ve really seen the maker community grow over the past few years, and beginners are working on SMD projects more and more. I’m hoping to see a ton of people building their own custom Arduino boards with the 32u4. SMD is honestly easier than through-hole if you have the right stuff, and with PID re-flow ovens and laser cut-able stencils at lots of hackerspaces, it keeps getting easier.

What really excites me is how this will start to open the door for people to make their own open source products that are pre-made and store-ready. You can actually get your hands on 10k 32u4s for a product run. The lower cost of parts and simpler circuit design will help people bring their costs down, and have competitive prices at retail. And being fully supported by Arduino will make it easier for people to make the jump from prototype to product.

As projects grow in size and scope, they will be ready for something like the Arduino Due, which will have a 32bit Cortex-M3 ARM processor. This will give people plenty of room in which to learn and develop. I think the Arduino Due is going to make even more things possible going forward, but I really like the Leonardo for its ability to bring nearly anyone into larger scale projects. I’m a huge fan of anything that allows people to learn easily.

The open hardware scene is still quite young, but it’s growing at a quick rate with so many amazing people making things and learning from each other. Events like the Open Hardware Summit this past weekend really gives me encouragement that things in the open hardware scene are going in positive directions, as we are already starting to make waves in the culture at large.

I look forward to the day that I can go into just about any store and buy a piece of hardware that I fully own and can make changes to as I feel. Not something completely proprietary that I have to hack just to get it to work the way I want, but something I have the choice to hack simply because I want to. The Leonardo with full Arduino support for the ATmega32u4 has us taking a few more steps towards that future. I can’t wait to see what products people come up with.

Bio: Jimmie Rodgers a full-time hacker, artist, author, musician, and whatever else he feels like. He travels the world teaching people how to make things and he designs and sells open hardware kits. His most popular kit is the LoL Shield for the Arduino, a 14×9 LED matrix with a lot of LEDs. 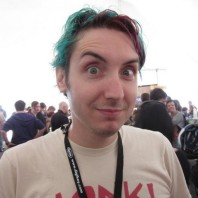 I am a full time hacker, artist, author, musician, and whatever else I feel like that day. I travel around the world teaching people how to make things, and I design and sell open hardware kits. My most popular kit is the LoL Shield for the Arduino, which is a 14x9 LED matrix with a lot of LEDs.