Every City Should Have a Maker Faire

London is the capital city of the United Kingdom, so why hasn’t anyone organized a Maker Faire here before? This was the thought running through my mind as I made my return train journey to South London, after a day out at Brighton Mini Maker Faire in September 2012.

With over 8 million people living in London, a thriving creative community in the east end, and a 600-strong hackspace, it seemed like the obvious place for such an event, and a little under 10 months later, I found myself busily running around, walkie-talkie in hand, lanyard around my neck, and bunting above me, shouting , “we are about to open, is everyone ready?”

The event was attended by over 1,500 people, who saw in the region of 70 Maker booths, among which were some fantastic projects including Liquid Pixels by Daniel Kupfer which, was produced as a piece for a Samsung commercial…

There was also a number of pieces of work from students and alumni of LCC’s BA (Hons.) Design for Interactive and Moving Image programme, including the following piece called Haptic – Unwanted Touch.

In addition to the various attractions were workshops in both through-hole and surface-mount soldering, electro dough, programming, paper-making, and much more, in all we ran over 15 hands-on workshops and activities for kids and adults alike.

There was also had a program of 15 minute lightning talks running through the day, and the following day we ran a day long Mini Maker Faire Meetup on Maker Culture, featuring talks, and panel discussions from the likes of Cory Doctorow, Tim Hunkin, and Dominic Wilcox.

Over the coming days, we will be publishing videos of the Lightning Talks, and Mini Maker Faire Meetup.

6 thoughts on “Every City Should Have a Maker Faire” 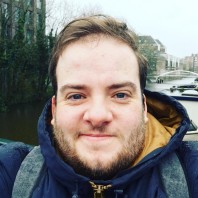