Last year our family had the pleasure of attending Maker Faire Bay Area for the first time. We all had such a blast, and with Maker Faire coming up again very soon I’d love to share our experience with you.

There were so many fun exhibits to keep us busy: robots, crazy bikes, 3D printers, a giant hydraulic hand, electronic musical instruments, light shows, an inflatable forest, innovative new toys, and loads of things that shot out flames. So many flames!

Our daughters Ava and Lola especially enjoyed playing on and riding the assortment of whacky homemade bikes and scooters. My favorite bike was the one that my husband Kim pedaled while the girls and I sat in comfort in the front. Kind of like a homemade cargo bike. Luckily for Kim, this bike had electric assist for when we got a little heavy!

The Hand of Man hydraulic hand was pretty impressive. Weighing in at 7 tons, the mechanical hydraulic hand is controlled by someone with their hand inside a special controller. When we watched, it was a young girl who had the fun job of controlling the hand. As she moved her fingers, the fingers of the giant hand moved too. It was pretty amazing to see. A pile of large scrap metal was placed close by, and the hand was used to pick them up, drop them, scoop them, and smash them. So much fun!

Of course there were lots of robots and crazy “vehicles” to check out.

And there were some familiar characters from TV and movies.

Another favorite exhibit with the girls was the Hugalopes stall in the Expo Hall. Here they made crazy critters that could be worn as even crazier hats. They enjoyed playing with them so much that we ended up purchasing a kit each.

3D printers were quite popular at Maker Faire and there were many makers displaying their printers and creations in the Expo Hall. It’s amazing to think that all the three dimensional creations below were made with a printer. This one’s definitely a technology that we’ll be seeing much more of in the future.

Back outside we made music with the electrical WidStick keyboard and FiddleStick violin. You can see and hear some of our music on Vine here and here.

In the foyer of the Fiesta Hall we checked out amazing displays by Tapigami, all created with masking tape. It’s amazing what you can do with such a simple everyday item if you put your mind to it. The girls attempted to make their own Tapigami creations — not quite as successfully as the pros!

Lola’s favourite exhibit was the Glow Cathedral, a beautiful inflatable forest set up in the center of the Fiesta Hall. She had so much fun running around amongst the “trees,” hugging them, and watching the subtle colours change.

The Fiesta Hall was full of all sorts of light shows in addition to the Glow Cathedral. We watched ArcAttack, a rock band with a guitarist whose music triggered the most amazing arcs of electricity across the stage. Amazing, although a little loud for the girls, who preferred the tranquility of the Glow Cathedral. Ava also enjoyed playing with a light panel on furry material and watching the ever changing light panels on the walls.

Of course, there was lots of food too, including over-sized pizza slices!

Among all of the futuristic technology we had some good old fashioned fun playing with hula hoops from Holistic Hooping.

Our last stop for the day was the BreastStop boob trampolines. Yes, you read correctly! Two trampolines with pink boob-shaped domes over the top! I don’t think that the girls noticed that the trampoline enclosures resembled giant boobs, but they sure did have fun bouncing in them. In fact, we all spent quite a bit of time at the end of the day bouncing.

We had so much fun at Maker Faire we didn’t want to leave when it finished. We’ll be counting down the days until Bay Area Maker Faire 2014. Can’t wait!

This year’s Maker Faire Bay Area will be held at the San Mateo Fairgrounds on May 17 and 18. All the information you need to attend is on the site. Come play! 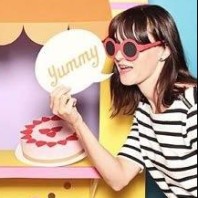 By Sally Mason of Little Hiccups

An Australian expat and stay-at-home-mum to two (soon to be three) little girls living a life full of little adventures, crafts and fun in the beautiful San Francisco Bay Area.