It’s my opinion that there are two very different kinds of laziness. Laziness that encourages procrastination is a vice. Laziness that motivates efficiency is a virtue. With that in mind, I was recently looking for a faster and easier way to cut heatshrink tubing (and if possible, wire). My virtuous laziness kept telling me there had to be a better way. What I had been doing was cutting one piece to the desired length, and using that piece as a measuring stick to cut subsequent pieces with scissors/wirecutters. That’s fine for one-off work, but I build solar lights in large batches. Even if you don’t have any production-scale projects, a fast way to cut is useful. For example, a CPU mod might demand 200 pieces of heatshrink 9/32 of an inch long; a wire harness for a robot might requires 60 pieces of wire four and a half inches long. Regardless of the application, cutting heatshrink or wire in quantity by hand becomes a gigantic timesuck.

Why do I need to cut large quantities of heatshrink tubing anyway? I could just wrap my crimps and solder joins in electrician’s tape, but heatshrink is more reliable and imparts mechanical strength to the joint. Also, it looks much better. Which of these two fuse assemblies below would you trust more?

So, I began a quest for a better way to cut heatshrink. The standard suggestions that I found were either use scissors and a ruler or other measuring stick, or buy an electric heatshrink/tubing/wire cutting machine for about $2,000. Neither seemed very attractive; I had already tried the first, and the second was overpriced for its function. After probably 16 hours of scouring my brain and the Internet, I came across a cutting table tool that model railroad enthusiasts use to cut tiny bits of wood and plastic. My interest in model trains has always been approximately zero, but this tool was really intriguing.

It has adjustable screw-down stops, and functions very much like a miniature chop saw, except it uses standard craft razor blades instead of a saw blade. Using the 90° stop to set a length to cut meant that my cuts ended up very nice and square on the ends. For even quicker cutting, I could cut multiple pieces with each chop. The end result? In a couple of hours, I was able to cut about 50 feet of heatshrink tubing into thousands of pieces of the various lengths that I use.

All that was pretty cool, but I wanted more than one function out of a $50 tool, and I was tired of cutting piles of wire pieces by hand. My first experiments showed that The Chopper II cuts through wire like butter; the ends it leaves are unbelievably clean. It dulls the blade quickly, but craft razor blades cost a few cents each, so that’s not a problem. The issue was getting accurate lengths: the 90° stop doesn’t work well for something as flexible as wire. The wire just bends when you push it against the stop (see below).

The tool as designed did not cut wire to length with any accuracy or speed. However, if  I could get the wire to run through tubing, that would prevent the wire from curving and make the length measurable. The clamps that hold down the adjustable stops worked just as well holding down pieces of small-diameter rigid copper tubing. So, I cut two pieces of tubing. One was a template (the same length I wanted my wire pieces). The other (on the side of the blade I was feeding wire in from) was an arbitrary length; it was just there to keep the wire from springing away after each cut. I got the best results using tubing with an inner diameter just slightly larger than the diameter of the wire I was cutting. Other materials besides copper would also have worked; I just used copper because small-diameter copper refrigeration tubing is widely available.

With this simple hack, I was back to basically the same procedure as cutting heatshrink. Push until it’s aligned, cut, push again (pushing previously cut pieces out of the way) until it’s aligned, cut, lather, rinse, repeat. It’s effective for cutting up to 14 gauge stranded wire and 20 gauge solid wire. The blade can cut thicker wire than that, but it really bogs down, which defeats the point of the hack (speed/efficiency). Unlike cutting heatshrink with stops, I had to eyeball that the wire was flush with the end of the tubing and ready to cut. That slows the process down a bit and probably introduces an error of about 1 millimeter in the length. I also have to cut a new piece of template tubing for any new wire length I want hundreds of. All that being said, it still much, much faster and more accurate than hand-held wirecutters, and a much better value than an electric cutting machine.

Conventional wisdom on a lot of manufacturing processes states that there are two kinds of tools; the painstakingly slow, hobby-grade hand tools, and the automatic, proprietary, expensive factory floor behemoths. As makers and entrepreneurs, we often need a third alternative that combines some of the flexibility and low cost of the former with some of the speed and efficiency of the latter. If the tool manufacturers won’t provide it, it’s up to us to re-purpose and hack our way there.

Rustom Meyer has more projects than he knows what to do with. He’s previously made toys, ceramics, jewelery, clothes, solar ovens, a custom bicycle, and flashlights, as well as renovating an 150 year old house. His obsession for the last few years has been small solar lighting/power systems: (www.yetisolar.com). This article is being simultaneously published on Rustom’s own blog at http://www.yetisolar.com/blogs/news 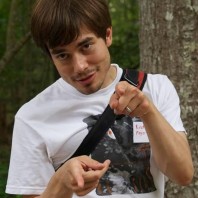 I have more projects than I know what to do with. I've previously made toys, ceramics, jewelry, clothes, solar ovens, a custom bicycle, and flashlights, as well as renovating an 150 year old house. My obsession for the last few years has been small solar lighting/power systems: (www.yetisolar.com).