Major League Hacking students will be some of the first developers to get their hands on the new Oculus Rift.

Major League Hacking (MLH) is the official student hackathon league. At high schools and universities around the world, more than 65,000 students come together each year at 200+ weekend-long invention marathons to build new apps, devices, and creations driven by nothing more than their own creativity and some free snacks.

Starting with Oculus CEO Brendan Iribe’s announcement of an expanded partnership with MLH at Bitcamp on April 8, we will be rolling out Oculus Rifts with support from Alienware for students to build the next generation of virtual reality projects. Student hackers have built some amazing projects using MLH’s current inventory of 150+ Oculus DK2s, like Shadow Realm VR and Oculus Bike, but the possibilities that open up to student hackers by using bleeding edge hardware are endless.
https://www.youtube.com/watch?v=jfY9KvvZufw?rel=0
As one of the co-founders of MLH, I’ve seen first hand how transformative these events are for our students. Hackathons are often the first place a student builds a project purely driven by their own curiosity and not by grades, which leads to some truly amazing creations.

But with a new platform like Oculus Rift becoming available to consumers, students actually have the opportunity to build the first ever viral virtual reality app or create an entirely new way of communicating or interacting with the world that could fundamentally change human behavior.

The creator of the Holodeck or the Metaverse could be at an MLH hackathon right now, planting the first seeds of an idea among their fellow creators.

The first time I ever tried virtual reality was at an MLH member hackathon, MHacks, in January 2014. A group of students had built a virtual reality Quidditch simulator using the Oculus DK1. I put it on, sat on the Wiimote-enhanced broom, and dove right in. The experience blew my mind. The video was pixelated and the movements were laggy but I immediately felt that indescribable feeling of ‘presence’, where my brain was tricked into feeling like I was flying even though my body knew that I could not have been.

From that moment forward, I knew that virtual reality was going to be a serious phenomenon. If a simple prototype could create such a powerful physical situation, the implications for a polished version in the future are enormous.

The idea of humanity consuming content and interacting with one another in a purely virtual world is no longer fiction, it is being made into a reality every weekend by students at our hackathons. 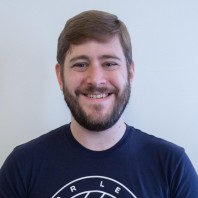