We’re very pleased to have Jie Qi on MAKE for our Advanced Materials month (which has been extended until Feb 6). Her bio is so impressive, I thought I’d post the entire thing:

I was born in China and moved to the US when I was 6… Fast forward to college at Columbia University. I started out a pre-medical/biomedical engineering major and spent a semester and summer doing tissue engineering research in the MBL group. That same summer, I got an internship in Brooklyn building sculptures out of bottles for Aurora Robson, through which I fell in love with art again. So I changed my major to mechanical engineering (because they get access to the machine shop!) and discovered new media art. At this point, I got started on the littleBits project with Ayah Bdeir and learned to design and build electronics. She introduced me to the Media Lab, and I immediately fell in love with the place. So I got a summer internship in Leah Buechley’s group. That summer, I discovered the Arduino and the joys of paper + electronics. After I went back to Columbia for my senior year, I continued working on littleBits and spent a semester attempting to make microscale artwork using photolithography and microfluidics in the LMTP research group. Turns out it’s really hard to make art when you can’t see it! After graduating (with a BS in mechanical engineering), I came straight to the Media Lab and started my masters in the High-Low Tech group. I’m still here, now in my second year, and learning tons every day!

Jie put together this wonderful introduction to shape-memory alloy (SMA) for us. Thanks, Jie! Great to have you aboard. -Gareth

You’ve likely heard about shape-memory alloys (SMAs), metals that change shape when heated to an activation temperature. When cool, they are malleable and can be shaped like a typical metal. However, when heated to activation, they return to their preset shape. At the atomic level, the crystalline structure of an SMA changes with heat from one regular structure to another. However, while all metals will change shape with heat (i.e. melt), SMAs change shape all in solid phase and this change is reversible. For example:

The most commonly used SMA is nitinol (nickel titanium). Commercially it can come in unset form, meaning it has no “memory” yet, as well as pre-trained shapes like muscle wire which contracts when heated (hence the name).

Because SMAs are silent, lighter than traditional actuators, and can be set to create many kinds of motion, there are a ton of cool things you can do with them that are hard to achieve with other actuators. Marcelo Coelho has experimented with combining custom-set nitinol with textiles to create actuated fashions as well as responsive and soft interfaces like the Shutters Project:

Yet another magical sculpture is the Robotany project by Jill Coffin, John Taylor, and Daniel Bauen in which the branches of a living tree are made to sway when someone walks by. Since the SMA wire is completely silent and hidden, the tree appears to be moving to a virtual breeze.

In my projects, I’ve found that SMA wires are perfect for actuating papers, which are rigid enough to hold interesting structures but soft and light enough to be moved by tiny SMA wires. Some examples are:

SMA Primer
If you’re using SMAs for the first time, I recommend starting with Flexinol muscle wire (which is available on Robotshop, or directly from Dynalloy). It is reliable and simple enough to hook up to a circuit. When you run current through, the resistance of the wire causes it to heat up and the wire will contract about 10% of its original length. Since there is a layer of oxidation around the wire, you cannot solder directly to the wire itself. To attach the flexinol wire to a circuit, simple fold the end of the wire into a “u” and use a jewelry crimp bead around the ends. The crimp bead holds onto the wire mechanically and also makes it possible to solder the ends for robust electronic connections.

The hardest part about using muscle wire is controlling the amount of current running through the wire. You want to give it enough for a dramatic effect, but not so much current that the wire burns out (and stops contracting). Flexinol wire has a consistent resistance per length and an optimum current as specified in the flexinol technical data.

One simple technique is to look at the target current from the data sheet and then use Ohm’s law (voltage = current x resistance) to calculate the length of wire that is needed to maintain this amount of current based on the power supply you have. Since these wires generally require hundreds of milliamps, I recommend getting a strong lithium-ion battery or use a wall power supply. For example, if I were using the 0.006″ diameter wire, which needs 0.400 Amps, and I have a 5V power supply, I would need a total resistance of 5/0.4 = 12.5 ohms. Since the resistance of this particular wire is 1.3 ohms/in, I would need 12.5/1.3 = 9.5 inches.

In general, always test your mechanism using low power and turn on the wire in short intervals. If you see a jerking motion, chances are the wire has gotten too much power and might in fact have burned out. If you have an Arduino, you can hook up the wire using a transistor and PWM the power. Start with a low duty cycle and work your way up until you get a strong enough movement. Note that once the metal is getting enough power to change shape, adding more power won’t make the movement more dramatic, it will only make the shape change more quickly.

Now that you have the basic electronics, here are some simple mechanisms you can use to get various motions out of your wire. One of the most dramatic mechanisms is the curling mechanism where you simply sew nitinol to the paper. In this case, when the wire contracts, the paper must curl around it to make up for the shorter length of wire.

To make a self-folding flap, anchor the ends of wire on the main side of the crease and attach the center of the wire very close to the crease on the flap. This mechanism uses the wire as a muscle to pull the flap.

By adding simple folds, you can change a mechanism completely. For example, going from curling to flapping only takes a couple of curved folds to each side of the curling mechanism.

You can add extra flaps to the folding mechanism to make a parallelogram, which makes surfaces rise off the page.

For these and other mechanisms, check out these projects from a recent paper electronics workshop 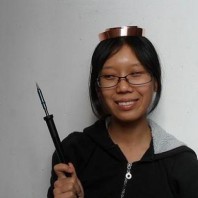