I make games because I imagine games I’d like to play and don’t see them out there yet. I enjoy creating, and turning my ideas into tangible objects, and I love shaping an experience for a group to share.

Two of my tabletop games, Diner and Knot Dice, will be available to play at the Greenbelt Mini Maker Faire on Saturday, April 5, which just happens to coincide with International Tabletop Day. Meanwhile, my Kickstarter campaign for Diner and five other awesome games will be winding to a close on April 6.

Diner was the grand prize-winning entry in the Dice Hate Me Games 54-Card Challenge. It’s a fast-paced game with some unique gameplay in which players take on the role of waitstaff in a friendly competition to make the most money in tips. You take orders for the tables in your section, gather the plates to fill those orders, serve your tables, and do it all as quickly as possible. Sometimes several players can play all at the same time, but sometimes the action slows down to give you a little time to plan. (Here’s how to play, and a full interview about it.)

While there are many different theories about how to begin making a game, I find that I’m most successful when I start with a theme and build from there. It’s much easier to find mechanics (the way the game works) that will fit the theme and make players feel like they’re doing something that makes sense in the game. After taking several pages from others, I’ve come up with my own rules for what is most important to focus on in a game design. For every player turn, ideally I want: 1. meaningful decisions, 2. interactions with other players, and 3. the feeling of being part of the games theme.

There are plenty of resources out there about designing games, but the most important advice I have to give is play, play, play. Get out there and play as many games as you can. No matter how old you are, there are so many more games than there were when you were younger — we are in a golden age of tabletop games. Learn about all kinds of different games, and play games you like (to figure out what you like about them) and games you don’t like (to figure out what you don’t). Find some good places to play and a good group of people to play with regularly. Your friendly local game store can probably connect you with some people in your area. If you’d like some ideas about where to start, get in touch; I’d be happy to talk about good games for different play styles, or direct you to some good game-making resources.

I have two upcoming projects that I’ve been spending a lot of time on recently. Knot Dice is a set of dice that can be used for puzzles, games, and for creating your own Celtic Knot artwork (which I’ll have at the Maker Faire also). I’m also creating a set of micro games that can be played anywhere in a very short amount of time. If you’re interested in these, sign up for my mailing list or follow me on Twitter and I’ll let you know when they come out. And please take a look at the Big Games for Small Pockets Kickstarter campaign – six very different games that won’t fill up your shelf and can be taken anywhere. 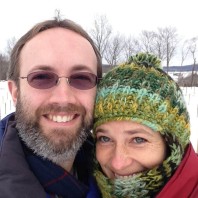 Matthew O'Malley is a game designer living in Takoma Park, MD with his wife and two kids. He has designed Diner, Battle of Wits, Celtic Knots (on iOS), and Knot Dice, and can be found at www.blackoakgames.com, @BlackOakGames on Twitter, and www.facebook.com/BlackOakGames.