I was a nerd from the get-go. From a very young age I was always curious about how the world around me worked. From dissecting — and subsequently reassembling — all my toys to pestering my parents about why exactly salt melted ice on the street, I needed to know. After learning each factoid or phenomenon, the inevitable next step would be to tell everyone around me because surely everyone would want to know how the cool mechanism on my Nerf bow and arrow worked.

Once I got to college I began studying mechanical engineering in order to learn how to create real, physical things. While learning formulas that described the effect of stresses on steel structures, my curiosity was sparked enough to make me withdraw from engineering altogether. I wanted to go deeper. I wanted to learn more about those forces on a fundamental level and where those formulas came from. I switched my major to physics and added a focus on education so I could better inform the world on the wonders that were happening all around them.

After being promoted to an instructor position at the New York Hall of Science, my passion for making physical objects was reawakened. Being surrounded by brilliant, creative people in an environment where the Maker Movement was on the rise (three years before the first New York Maker Faire) inspired me to build all the apparatuses I needed to do better demonstrations and activities with my students.

While I would love to say that inspiration was the sole motivator behind making for science education, in reality it was necessity that truly drove me. At a nonprofit science museum, money is always a factor, and budgets, specifically those that cover materials costs, never go as far as you need them to. More often than not, my fellow instructors and I would spend long hours McGyvering an apparatus we needed only because we knew it would help our students understand the science content just a little bit better. Hopefully, if we built it well enough, a lot better.

Sadly, this type of financial situation is not only common, it’s characteristic of almost any setting in which education is a primary focus. Decreased funding and tightened budgets have for years forced educators (the good ones, anyways) in both formal and informal education settings to become makers for the sake of their students. It’s no coincidence that so many Maker Faires are either hosted by or affiliated with museums and science centers. This is why it’s important to highlight not only the way museums educate the public on making, but also the making done by museums themselves to come up with new and engaging interactions in both classrooms and exhibition spaces.

Almost two years ago I decided to quit my job and return to grad school to study Design and Technology at Parsons, the New School for Design. There I would pursue emerging technologies and make it my goal to explore how they could be applied to increasing the public’s engagement with the STEAM disciplines. I quickly cemented my initial suspicion that physical computing and other open source (i.e. free!) technologies are the perfect platform for building the next generation of science exhibits.

For my graduate thesis project, I have proposed to build a tangible/gestural interface for learning about the stars and the fabric of spacetime in which they reside. By projecting interactive animations on a flexible, computer-controlled surface, The Spacetime Explorer will allow museumgoers to explore the different changes matter goes through in the stellar lifecycle and see how these dramatic changes and events affect the curvature of spacetime.

The New York Hall of Science has agreed to display The Spacetime Explorer if it can be built to spec. However, I need help! Materials and fabrication are more than I can afford on a student budget and so I have created a crowdfunding campaign to help me bring The Spacetime Explorer to life. Please see the short video below to learn more about the project and how you can help bring the science of spacetime to a hands-on science museum!

For more information, check out The Spacetime Explorer crowdfunding page. 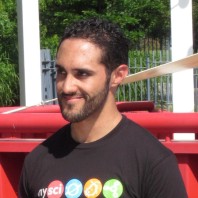