Never let it be said DEFCON attendees don’t know how to dress up. After one session today, I spotted attendee Paul sporting a snazzy electric blue bow tie. Although he claimed he didn’t actually make anything—he used an off the shelf LED matrix module—he did need to whip out a soldering iron to repair the PCB connection to the battery connector as a track had lifted.
He used the LED matrix’s ability to display a bitmap and drew a bow tie image to display. Simple but effective.

Physical Insecurity
I’ve often found some of the most impressive sessions at DEFCON are those covering physical security—doors, locks, safes and similar products. This year was no exception with the session “Safes and Containers: Insecurity Design Excellence” which had a particular focus on gun safes and their (in)effectiveness. During the presentation, the panel demonstrated excellent “use what you have” technique opening multiple safes with paper clips, fast food straws, gravity, and fingers. Oh, and toddlers. Which was amusing, until you remembered what the containers were supposed to be keeping safe. 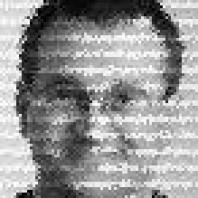