Attendance and exhibitors at Maker Faire Tokyo have grown dynamically, at least 50% per year. The previous venues proved too small, so this year the event moved to the Big Sight Convention Center – the largest event and trade show facility in Japan.

Kenji Ishida’s transformer robot was showing off for the crowds of makers.

Sugiura Machine Design demonstrated how the performance and look of off-the-shelf robots, like the ROBOTIS DARWIN-MINI can be improved and extended using 3D printing technology.

This booth, focused on designing and crafting custom shoes, was particularly interesting for me since I can never buy clothes that fit off the shelf.

Fully instrumented autonomous ocean-going kayak equipped with every type of sensor, sonar, and navigation equipment you can imagine.

Just because robots are replacing human operators in some jobs doesn’t mean that they can’t be cute and funny.

Shota Ishiwatari, creator of the popular Raspberry Pi based RAPIRO humanoid robot, was happy to answer questions and share his knowhow with attendees. Ishiwatari has had several successful international Kickstarter projects and told me that designing the product was the easiest part of the Kickstarter cycle. For RAPIRO he ended up spending over 70% of his time making sure that the Kickstarter webpage and offers were optimized to resonate with potential backers.

Yoshifumi Omata’s dream was to create the humanoid robot Pro Wrestling competition in Japan. Participants design and build their own robot wrestlers, costumes, and back stories. So far, over twenty competitions have been held, sometimes overseas including Maker Faire Kansas City.

The Skeltonics exoskeleton was a huge hit with people lining up to climb on board and try it out. The system uses basic master-slave control systems to expand and enhance human performance.

This Nixie tube digital wristwatch runs off of batteries and uses ribbon cable for the watch band.

Rather than using servos or motors, this enhanced hand incorporates leverage and mechanical linkage to extend human capability.

Kazu Terasaki delighted young and old alike with his GlueMotor servo interface for tablets and smartphones by letting them wave his balloon ears by moving their finger across the tablet screen. Terasaki originally developed GlueMotor to make prototyping easier and is constantly surprised at the new and innovative designs that users come up with.

Maker Faire Tokyo wasn’t quite as crowded as the subway cars at rush hour, but it came close. Capped by physical space limitations at 300 exhibitors, the organizers reportedly had to turn down almost 200 additional applications. Official attendance figures aren’t available yet, but on-site estimates of the crowds topped 30,000.

This furry little creature has cheeks that are illuminated by internal LEDs giving it more personality and appeal. The Japanese craftsmanship and attention to detail were extreme.

With two successful Kickstarters already to their credit, and more in the works, the BreadBoardManiacs have a real passion for helping other makers and improving their tools.

Dale Dougherty’s presentation on the maker movement attracted a SRO crowd numbering in the hundreds. Japanese makers were particularly interested in Dale’s comments and observations on how making stimulates creativity, discovery, and learning.

Japanese fans into Tamiya Mini 4WD racing realised that 3D printing allows them to fine tune and optimize performance of their vehicles.

It wouldn’t be Japan if Hatsune Miku didn’t put in an appearance.

Five years ago Nao Maru was making resin cast heads for his famous King Keyser series of robots. Now he prints them using an Afinia 3D printer, then paints them, cutting several days out of the fabrication process.

This group of makers is creating new information systems for construction and road work crews including this safety helmet LED visor that dynamically displays warnings to drivers.

Traditional Japanese Kendama toys produced and decorated on a custom made lathe.

This tiny MicroBike is actually fully functional and rideable.

This group of makers demonstrated how to create a cheap yet functional Oculus Rift clone (FakeRift) using a smartphone and a collection of parts bought at the local dollar store.

Only a maker-parent would be inspired to create this Arduino powered automated baby-wipe dispenser. When your hand approaches the sensors on the front, the lid pops open offering a fresh wipe. Then it closes by itself making sure that the wipes don’t dry out and are always fresh.

A VERTOL “rocket” platform capable of smoothly taking off, manuvering, and landing. 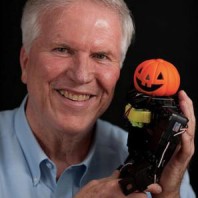