Maker Faire Kansas City celebrated its third year with bigger crowds than ever before.

A TARDIS, done in balloons.

Help me KC Maker Faire, you’re my only hope.

Super Awesome Sylvia’s WaterColorBot painted on its own.

3D printing continues to be the rage.

A RTS game of Pac-Man.

Kids lined up to learn how to make paper from recycled materials.

Before making prints, the ink was spread.

… with an affordable aerial platform.

The Voler: Thieves of Flight crew put on an indoor show.

The Mini Maker Faire took advantage of the great weather, too.

The stage was busy each day.

3D printing with ink and a DLP projector.

The KC Clay Cuild got hands-on and dirty.

The builders from nearby LegoLand Discovery Center came over to create a pirate ship.

Summers in Kansas City can be brutal; temperatures can top triple digits, compounded with a high humidity that makes the outdoors feel like a sauna. However, this past weekend, while half the country was suffering through blast furnace like weather, it was more like glorious spring in the City of Fountains. Great weather meant a big turnout for the city’s third Mini Maker Faire.

In its third year and housed in and around the city’s historic Union Station, Maker Faire Kansas City keeps getting bigger and better. George Guastello, president and CEO of Union Station, says “Union Station is approaching our 100th anniversary in 2014. It’s the second largest operating passenger rail station in the country … and as this building has re-engaged and rebuilt over the last 15 years, it has become the crossroads for science, culture, technology, and entrepreneurship. It’s become a civic center, it’s become a science center, it’s become a place where arts and science and STEAM education have found a home.”

If the crowds were any indication, Maker Faire has also found a good home in the cavernous station. This year’s celebration of engineering, crafts, and DIY boasted over 300 Makers, up from around 230 last year, and almost 12,000 in attendance, up from 10,000 the year before.

Among the highlights were CandyCam, an affordable, rotating, and pivoting remote control aerial camera platform; Sedgwick 3D DLP, a low-cost 3D DLP printer that uses light cured resin and a standard DLP projector to print 3D objects at a resolution of 0.1 mm; as well as perennial favorites like Arc Attack and EepyBird. There was even the opportunity to see ShopBot’s impressive HandiBot in action.

Young makers were well represented at the Faire, too. Super Awesome Sylvia was there to show off her fantastic WaterColorBot, a robot that turns digital vector art into water color paintings; and another young San Mateo veteran, Ted Brull, who makes clocks from repurposed computer parts. Additionally, there were plenty of robots, LARPing, a custom car show, PowerWheels racing, and a huge slate of interesting and engaging speakers.

Maker Faire has become a annual family friendly tradition in Kansas City with the aisles and outdoors packed with kids grinning and looking on in amazement. That sort of sense of curiosity and wonder can only mean big things for the future of the Maker movement. 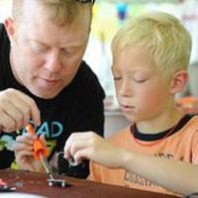 Dave Banks is an advertising professional by day, toy repairman at night. He writes. A lot. You can find his work at geekdad.com or his irregularly updated personal blog, friendlycurmudgeon.com. When he has spare time, he enjoys playing games and watching cars go really, really fast. Follow him on Twitter: @davebanks.