I can still remember how I felt after the tsunami in Japan caused rolling blackouts in Tokyo. I felt so powerless sitting in the dark and not being able to do anything. My life normally revolves around an assumed existing infrastructure of readily available power. But in that time, it was no longer true. When the blackout hit my area, everything would go dark (including the trains). You couldn’t even go out because nothing was open. No lights were on, and it was dangerous to walk on the sidewalks when the street lights weren’t operational.

Imagining myself back in that position, a position where I suffered for months triggered a strong emotional response in me. Jacinta and I started brainstorming ways to help Puerto Rico. Although there wasn’t much we could do, we could at least send our solar lanterns out there to provide some relief from the darkness. The thing that stuck most with me during the time we had city-wide blackouts was the complete darkness that existed throughout Tokyo. We figured that those in Puerto Rico that were experiencing the same thing, receiving a source of light would hopefully cut through some of that fear and provide some comfort. It was was something that we could contribute that could be immediately useful.

Our initial goal was to send 100 solar lanterns to Puerto Rico, so we reached out to friends and friends-of-friends to find reliable people on the ground that could get the lanterns where they needed to go. Karen Agresti, a friend and co-founder of Mothership Hackermoms in Oakland, put me in contact with Vanessa Klar whose brother, Jose, is a photojournalist on assignment in San Juan, Puerto Rico. He also helped set up an orphanage in Iraq and charity campaigns to help villagers in Indonesia after the tsunami and earthquake in Haiti.

All of us worked closely to plan out the fundraising and figure out how to get the lanterns to her brother in San Juan. From there, he would steer them to distribution points on the ground and places in need around Puerto Rico. Once we had Vanessa and Jose on board, the project started getting legs.

After coming back from Shenzhen, Jacinta and I spent the next few days putting together the first batch of 50 solar lanterns that we donated and shipped. Friends were asking if they could help out, so we set up a page where people could buy a solar lantern and we’d use the proceeds to donate a lantern to Puerto Rico.

The response was bigger than we expected, and the sales fully covered the next 50 lanterns we’re sending out. By this point, the goal of the Hackerfarm Puerto Rico Project (we didn’t have time to think of a better name) has technically been reached.

We’re now considering the future of this project, one that has actually grown larger than we first imagined. How can we move it from donations to self sufficiency? We’ll continue fundraising for another 100 solar lanterns to send out, since there’s still an immediate need. After that, we’d like to take the project into its next phase where we find people in Puerto Rico that can take over the project. Since we’re quite familiar with the markets in Shenzhen, we can help arrange shipment of parts and raw materials to Puerto Rico. Then the lanterns could be locally made, distributed, and sold.

In our eyes, a successful outcome would be to have this project get adopted by a local hackerspace or educational facility. Then they can train people to make and solder their own lanterns, as well as use the proceeds from the sale to fund more lanterns, training, and perhaps the facility. That would be amazing.

For more info on the project and how you can help, check out the Hackerfarm Puerto Rico Project Page. 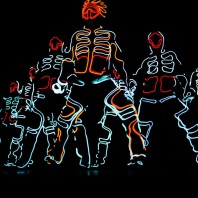 Jacinta Plucinski runsZoot Publishing and publishes experimental board games and interactive fiction. She's also the author of Who Ate the Cake, a choose-your-own-adventure book for children. She's the head of the FarmLab experimental farming project at Hackerfarm and also teaches workshops on how to print and publish books and board games.