Like all delta printers, Atom 2.0 is built for speed but not all deltas have quality prints to back up the speed. Luckily, it succeeds in both categories by using some top of the line components. The printer features high-torque and precision stepper motors, carbon fiber rods that gracefully carried the hot end attached by magnetic effectors, and a hot end that heats up to 200°C within a minute. The magnetic effectors make it quick and easy to detach the hot end to repair it or replace it with one of Atom’s laser engravers, which was not available for testing, or a dual hot end that is still in development by the company.

Getting started was simple and quick. Although it usually ships as a kit, our test printer came already assembled per our testing criteria. Building a kit is a great approach for users that want to learn more about 3D printing, but not for those looking for a turnkey solution. Looking back, I would have loved to take a shot at assembling the printer. Atom3dp provided an assembly guide that had nicely detailed graphics and easy instructions.

One thing that makes the Atom 2.0 stand out is its documentation. Not all companies provide enough quality physical documentation, but I was impressed by the amount of effort that was put into the resources, including detailed physical booklets, a dedicated website with troubleshooting guides and tutorials, and a community slack channel. The slack channel was a modern and unique spin on a support forum. I enjoyed the “Mastering the Atom 2.0” guide, which included useful tips for maintaining the printer and getting the most out of the software.

But every good thing has its flaws, I ran into two instances where the filament stopped extruding. The Atom 2.0 features three fans: two layer fans and one fan for the cold zone of the hot end. Despite the fan on the cold zone, the heat from the hot end crept up into the cold zone and caused the filament to swell and jam. I solved this issue by retracting the filament and then clipping the swelled end. Despite the delay caused by these two jams, the Atom 2.0 was still one of the leaders in completing its test prints. These two jams seemed to be isolated though and were my only issues.

The ease of setup and the quality of prints are things that any user would appreciate. The quality of the included physical documentation, the additional online support, and quality of the components make the Atom 2.0 a great printer for a beginner. The $1,699 price tag may scare away some newcomers, but spending the extra bucks for this printer is money well spent.

Who wouldn’t want a printer with a sleek design and a big build area that prints good quality at a fast pace? 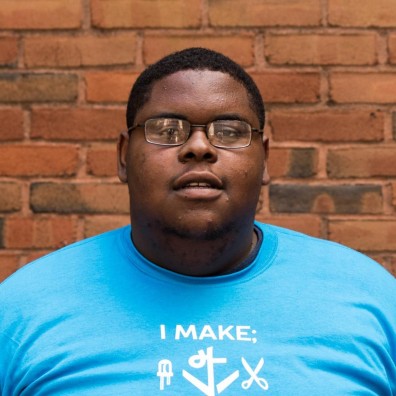 Darius is a 3D Printer Specialist at Digital Harbor Foundation where he founded 3D Assistance, a 3D printer repair service for educators throughout Baltimore. He’s currently a second-year college student.

Coat the glass bed with a glue stick before printing, but wipe off the dried glue with isopropyl alcohol between prints, and apply again to maintain good adhesion.