Developed by Shubham Banerjee, a 7th grade student from Santa Clara, California. BRAIGO is a Braille Printer using Lego Mindstorms EV3. This concept slashes the price of a printer from more than $2000 to around $350 for education, teaching and home use purposes. Thus giving a more cost effective printer for the disadvantaged.

The challenges with assistive technologies currently available are either too expensive or difficult to obtain for normal people without government or non-profit sponsorships. According to WHO reports, there are estimated 285 million visually impaired people worldwide and 90% of them live in developing countries. At this moment the cost of a braille printer is more than $2000 for a basic version. Thus many millions of people across the world have limited access.

To give access to easily assemble and build a braille printer for the masses, the basic ability of DO-IT-YOURSELF (D-I-Y) is key. The kit should be readily available at stores or procured online from reputable websites to make the process easy for adoption. Most printers operate in X (to move the print head) -Y (to push the paper) – Z (to print or not to print) co-ordinates. The printer has to be compact and self-explanatory. Engineering as a discipline is the application of scientific, economic, social, and practical knowledge in order to design, build, maintain, and improve structures, machines, devices, systems, materials and processes. In this experiment, Shubham relied on my love of LEGO and readily available Mindstorms EV3 robotics kit to build a D-I-Y Braille printer and program the device to print in Braille. He worked with a constraint that all parts should be from one kit and some low cost readily available add-ons to make such a printer. After studying the Braille language; Shubham understood that a visually impaired individual feels through his/her fingers the bumps on a paper through a combination of 6 dots. If he could make a printer that prints (by making holes in a paper) as a mirror image of the letter and when flipping the page we should be able to translate letters into BRAILLE. Shubham used rapid prototyping concepts where he tried to build models and programing it to see if he is able to get the desired results. Shubham had to build and break 7 different models before settling on a final one that was able to print the six dots in a desired sequence according to the Braille standards. After which, he programmed the letters A-Z. A normal calculator paper is used to provide the proof of concept.

He validated version 1.0 of BRAIGO at Santa Clara Valley Blind Center based in San Jose and also with Hoby Wedler at his laboratory in UC Davis. The first prototype of the proof of concept has been successful and him providing the building instructions and software as open source will provide a low cost alternative solution to the visually impaired community. Shubham achieved an 82% reduction in cost and have been overwhelmed by the encouraging feedback from both the sighted and the blind equally. By providing the full build instructions in Makezine, Shubham hopes to rally the maker community to enhance Braigo and this effort will help the visually impaired.

Understanding the Braille concept, the tools and the mechanical motions In this first prototype of Braigo, grade 1 braille language is used. Most printers operate in X (to move the print head) -Y (to push the paper) – Z (to print or not to print) co-ordinates. You will notice a picture here at shows the head of the printer and the illustration of the head movement to make dents on the paper. Also to understand the Braille language and its translation into Braigo deployment is provided for reference. You would need the Lego Mindstorms EV3 kit, a calculator paper roll, a thumbtrack and some metal washers to provide weight and batteries to power the Brick of the EV3 and a computer to transfer the program to the Brick through the USB. A youtube video is available for you to check out the Braille concept: Attached is a picture of the EV3 code that prints 6 dots. This is called the mother program. All the letters and numbers are based out of the mother program where you decide to skip a dot or make a dot based on the letters that you choose to print. The EV3 software can be downloaded from Lego website

How to build the print head The most important part of Braigo is the printhead. Even before you start building the body assemble the print head as provided in this youtube video: For ease of access here is the link to download the .ev3 file Detailed build instructions can be seen here

Check out how it works

For reference I am adding the video for the demo.

Here is the video of the validation of Braigo. Think about the feedback and see if you can enhance Braigo further. 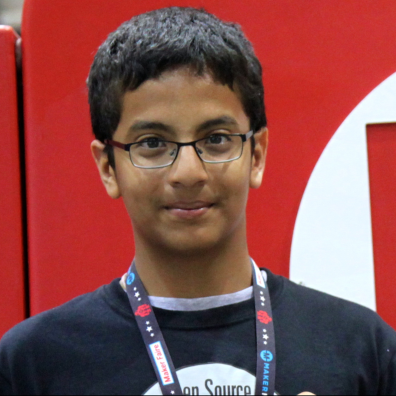 Shubham Banerjee is a seventh grader. He is known for creating Braigo, the low cost DIY braille printer with Lego. He was born in Hasselt, Belgium. The family moved to San Jose, California when he was 3 years old. Later he moved to Santa Clara, California and completed his elementary schooling at Don Callejon School. He joined Magnolia Science Academy in Santa Clara in middle school for couple of months, before moving to Champion School in San Jose where he is continuing his 7th grade. He continues to reside in Santa Clara, California with his parents and younger sister.