The CheerBot is a robot that roams the house and looks for certain colors using its camera. When it finds one of the colors I’ve told it to seek, it changes the color of the lights on my Christmas tree to match. It also submits the color to the Cheerlights service, which synchronizes the color of participating light displays around the world. It’s a complicated setup, but I’ll walk you through the basics. Most folks will find plenty of opportunities to learn with this project. I know I did.

To summarize the build process, you need to make a robot that can drive around without bumping into things, and then put a camera on it with code analyzing the video and tweeting when certain colors are found. As with most projects, there are near infinite ways to go about it. I’ll give you guidance on one way, but I challenge you to learn new things and make the project your own.

The BeagleBone Black is ready to boot out of the box, but you will need to connect it to the Internet. I suggest powering the BeagleBone with a 5V, 2A wall adapter until your battery is ready. Likewise, connect to your home network with an ethernet cable until you get WiFi setup.

Connect your Beaglebone to your wireless network so it can update the Cheerlights service while roaming the house. When using a WiFi dongle, be sure to have your BeagleBone plugged into a 2A power source (be it wall wart or battery), and use a powered hub on the BeagleBone to connect the WiFi dongle. If the BeagleBone is only getting power from a connection to your computer's USB port, it does not get enough to power a WiFi dongle with its own USB port.

This library allows you to tweet from a Python script.

Create a Twitter account for your robot, or let it use yours. Login into dev.twitter.com/apps/new with the account of choice. Setup an "App" with the required information on the first page. Then go to settings tab and change "Application Type" to "Read and Write". Click the button to "Update Application Settings". Go back to the "Details" tab and "Create my access token". Wait a minute, then refresh the page. Your token will be ready to have its various parts copied and pasted into the CheerBot Code (both color.py and cheerServer.py). The servos require a separate power source than the BeagleBone, but need to be connected to the PWM outputs of the BeagleBone. The infrared sensors output 5v, but the BeagleBone can only accept 1.8V to its analog-to-digital converters, so resistor voltage dividers are needed.

The BeagleBone Black prefers to be powered through its 2.1mm barrel jack. For the CheerBot, we're using a battery that outputs power via USB jacks. We need to make a cable that takes power from a USB connector and feeds it to a 2.1mm barrel plug. I much prefer to scrounge for materials rather than place a big parts order for every project. For this project, we need a robot that wanders around without hitting anything, and is big enough to carry all of our hardware around. To build mine, I sat down and started fitting things together until they worked.

I happened to have a few infrared distance sensors that output an analog voltage that the BeagleBone can read through a voltage divider. If all you have on hand are sonar sensors that require precise timing, you might want to use an Arduino to read the sensors and either do all the driving or pass the sensor values to the BeagleBone.

I used Vex parts for my robot chassis, but if you don't already have a set of those, it will make more sense for you to use something different. You can even buy ready-made robot chassis, and get a motor controller that will allow a BeagleBone to drive regular DC motors with pulse width modulation. Before letting it loose with your furniture, it's a good idea to test the sensor code and connections. Put blocks under the frame so the wheels aren't touching anything and move your hand in and out of range of the sensors. Watch the speed and direction of the wheels to see how the robot reacts. Basically, if an obstacle approaches on the left side, the right motor should slow or stop to make the 'bot turn away from the obstacle. 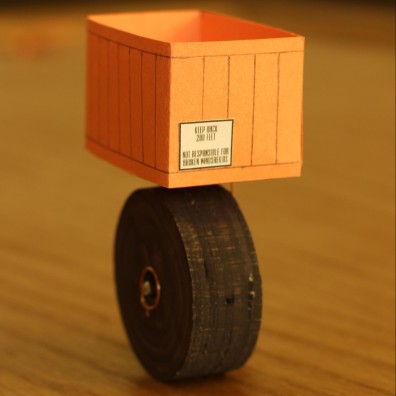