It wasn’t that long ago that putting food in liquid nitrogen was something you’d only see in a high school science class, but these days it’s fast becoming a mainstay of modernist cooking. It’s odorless, it’s tasteless, and it’s not going to poison your food any more than our (78% nitrogen) atmosphere will poison you. Because it’s so cold (–320.44°F to be exact) it boils at room temperature and evaporates out of your food as it rapidly chills it.

But why would anyone freeze food with liquid nitrogen? Every time you freeze something, it creates crystalline structures within your food, which can break up its cellular structures, affecting the texture. The faster the freeze time, the smaller and less damaging the crystals. So when professional chefs use liquid nitrogen they manipulate not only temperature, but texture as well. Which isn’t to say manipulating temperature can’t let you do extraordinary things — Google “cryo-fried” for more on that. More than anything though: You do it for the hell of it.

With some common-sense precautions, liquid nitrogen is perfectly safe to use for some kitchen experimentation. Here’s what you need to know to get started at home.

Liquid Nitrogen
Available at your local welding supply store. Prices vary, though generally speaking the gas itself is pretty affordable. Some stores will require you to buy a minimum amount. Call around to see which store has the best deal for your specific needs. And I do mean call, since many of these places won’t explicitly list this information on their websites. Also, when you move liquid nitrogen to any container, some of it will evaporate just in the process of cooling the vessel down. The rest of it will evaporate over time; how much time depends on the size of the container.

Dewar
A dewar is a specialty container made to both insulate and relieve pressure from the expanding gas inside. It’s the safest way to move and store liquid nitrogen and you’re unlikely to find someone who will sell liquid nitrogen to you if you don’t have one of these. Even a small dewar will set you back a few hundred dollars, but you can buy these used or may even get lucky and find a place that will rent the dewar to you when you buy your liquid nitrogen (just expect the deposit to be almost as pricey as buying a new one).

Small Insulated Container
You’ll probably want a way to move smaller amounts of liquid nitrogen from your dewar to your kitchen. Your best bet: a vacuum insulated coffee dispenser. Unlike a thermos, these are not designed to be completely sealed — sealed containers are a major no-no for any quickly evaporating liquid.

Basic Cooking Supplies
You don’t need specialty items once you’re actually using the liquid nitrogen. Some things you should have on hand: a stainless steel mixing bowl to pour your nitrogen into, tongs, slotted spoons, and a long-handled sieve for taking food out of the nitrogen bath. Grab a hammer or meat tenderizer too, because you’re going to want to smash something that’s been frozen solid.

Cryogenic protective gloves. Liquid nitrogen can cause frostbite if there is prolonged skin contact, but the risk of this is relatively low as long as you move the liquid fast enough. Momentary contact won’t be an issue thanks to the Leidenfrost effect — a protective layer of evaporating gas will form between your skin and the liquid as it boils off — but this isn’t long-term protection. Wearing gloves is the best practice, and can also protect you from tools that may become extremely cold. The Leidenfrost effect will not protect your eyes, so keep your safety glasses on.

Ventilate. 1L of liquid nitrogen will become 700L of nitrogen gas once it has evaporated. Enough of it in a small, enclosed space can kill you. Dead. Simply by displacing the oxygen you need. It’s called inert gas asphyxiation. I don’t want to undersell that, but the solution is simple enough: open a window, open a door.

Don’t seal it up. Just don’t. Nothing you own can contain the pressure of liquid nitrogen turning into gas and it will explode if there’s no way for the gas to safely escape the container. This is why you throw down so much money on the dewar; it’s designed to not explode.

Shown above: Why you don’t want to ever seal up liquid nitrogen.

Using liquid nitrogen for part of your dessert is a neat trick. Using it for your entire dessert, however, is downright impressive. Here’s how to make an ice cream sundae base and a bevy of garnishes using this wondrous liquid.

5-Minute Ice Creams and Sorbets
For ice cream, prepare your ingredients as you would up until the freezing step, then put these ingredients in a mixing bowl. While stirring the mixture, add an equal amount of liquid nitrogen (being careful not to overfill the bowl). For a stand mixer, use the flat beater attachment. If your ice cream isn’t sufficiently chilled by the time the smoke clears, simply add more liquid nitrogen. For sorbets, just use your favorite juice instead.

DIY Dippin’ Dots
Put room-temperature ice cream in a squeeze bottle and quickly squirt small droplets into the liquid nitrogen bath until you have a bunch of tiny frozen globules. Scoop them out with a sieve.

Chocolate Nests
Put warm, tempered chocolate in a piping bag and swirl the chocolate directly into the liquid nitrogen bath to create a squiggly nest of chocolate.

Fresh Yet Powdered Herbs
Mint and basil work great for dessert plating. Freeze herbs until they’re brittle, then grind them up. Use the powder while it’s still frozen to create dusting effects on the plate. Once the powder thaws it will retain that powerful, fresh herb flavor so you won’t need much.

Dragon Breath Marshmallows
Take a marshmallow and freeze it for 40–50 seconds in the liquid nitrogen, then take it out, wait about 10 seconds, and pop it into your mouth to see your breath as it comes out of your nose. This is a trick that works well with foods without moisture, so you can experiment with crackers or dry cookies too. 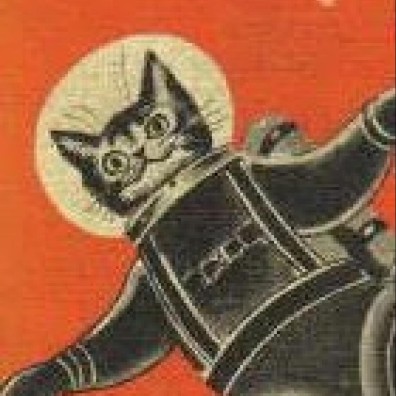 A typical day for Lisa includes: getting up to see the sunrise, bicycling, interning at Make:, reading and writing short stories, and listening to audiobooks and podcasts for hours while working on projects or chores.