Strap a Robot to Your Face! Your Expressions Are Now Controlled by Technology

Here’s how to build a set of remote control eyebrows from an old headlamp and a small handful of parts. Two small motors mounted to the headlamp will be attached by thread to your eyebrows for a natural look.

Beyond its obvious practicality, this project makes a great introduction to DC motor control, infrared remote control, and moving from working with an Arduino to working with the bare ATMega328 chip. These concepts are combined with some minimal extra circuitry.

The end result will be a great conversation piece, that is… if you don’t stab your eye with a toothpick. My implementation supports calibration, independent control of each eyebrow, and a 1- to 9-way waggle feature. Expressions vary from skeptical to shocked to very, very shocked.

Because you’ll probably be working with a different remote control than mine, you’ll need to experiment with decoding the buttons and assigning them to functions. Reverse-engineering household junk is a satisfying way to save money and reduce e-waste. You’ll need to be familiar with Arduino-style C code to adapt the supplied source code to suit your own remote control.

Step 1: Breadboard the circuit around the Arduino
We’ll start by using the Arduino to do some prototyping and testing. We’ll use the ATMega328 controller later, once we’re satisfied that all the pieces are working well together.

On a breadboard, wire up the VS838 IR receiver, L293D, motors, etc. to your Arduino using the following diagram:

Note that IRLib should be able to recognize the most common remote control protocols, but at least in the case of my Pioneer remote control, it didn’t know how to decode the data. Fortunately the library supports using a “fingerprint” hash from raw data, so button presses can still be reliably detected. This technique should work with recognized protocols as well, so it shouldn’t be necessary to change the code overmuch even if your remote’s protocol is recognized by IRLib.

Step 3: Upload the “brows.ino” sketch to the Arduino
You’ll find the required Arduino sketch available from this repository. Once the sketch is uploaded to the Arduino, open the serial console and try pressing remote control buttons with the remote facing the IR receiver. You should see hash codes corresponding to unrecognized button presses. (The “brows.ino” sketch sends these to the serial port when it doesn’t recognize them.)

Step 4: Hook up the button hashes to the brow functions
In the source code for the sketch, you’ll see “case” statements with hash codes for remote control buttons like:

Your remote control will probably have a different number and layout of buttons, so you’ll have to experiment with this to find a good mapping.

As you change these hashes, upload the sketch and test whether your motors are working according to the button you press.

Add the power and ground connections to both sides of the ATMega328 following the diagram.

Do not hook up the battery yet. For now we’ll continue to use the Arduino for power.

Because our circuit does not require any of the pins used to program the ATMega328, you can leave the Arduino connected until you’re ready to move the circuit to perfboard.

Step 7: Upload the “brows.ino” sketch to the ATMega328
Now that your Arduino is set up to program the ATMega328 chip, upload your sketch. Your breadboarded circuit should start working with the remote control, now being driven by the ATMega328. The Arduino is now just providing power.

This is your last chance to (easily) tweak the program; make sure you’re happy with it before proceeding. Then remove the Arduino entirely; try hooking up the battery pack and verify that it still works.

Step 8: Move the circuit to perfboard
You now need to move everything on the breadboard to the more permanent perfboard, soldering connections as you go. Complete the circuit using the empty DIP sockets in place of the ICs, and only add the ICs when you’re finished. This will help prevent damage to the ICs during soldering from static discharge or overheating; using a socket for the ATMega328 will also mean program changes aren’t impossible, just annoying. When laying out the components, consider the physical space available on the headlamp. When transferring circuits, I find it easiest to remove each wire from the breadboard as I go; when the breadboard is empty, that means I’m finished.

Once you’re finished, apply power from the battery pack and check that it’s working.

Step 9: Assemble the hardware on the headlamp
The details will depend on your headlamp. The motor placement is probably the most important; on my old Petzl, once the bulb assembly was removed, a single zip tie per motor was sufficient to affix it securely. You’ll want each motor’s spindle centered over an eyebrow.

To attach each motor’s spindle to its bobbin, I simply wrapped a strip of sturdy adhesive tape around the spindle until the bobbin was a tight friction fit. This has the added benefit of slipping under tension.

Congratulations, you’re ready to never ever affix it to your face!

Step 10: Don’t affix it to your face
You should never attach this to your face for health and safety reasons. Specifically, you shouldn’t wind thread around each bobbin and tape the dangling end to your face with a piece of band-aid adhesive just below the eyebrow (above the eyelid). You also shouldn’t tie a small piece of toothpick to the end of the thread to give the band-aid something to stick to.

There are many left-over I/O pins on the ATMega328, so making your eyebrows sensor-driven is easy. For example, an acoustic sensor could raise eyebrows in case of sudden noise. Or connect a wi-fi module and help pioneer the Internet of Things On My Face.

The thread from the motors can be attached to hooks under your lips for a convincing smile when your muscles just aren’t feeling it. For both eyebrow and smile control, an additional H-bridge would support more motors.

Now that you’re basically a cyborg, a world of new possibilities is yours. 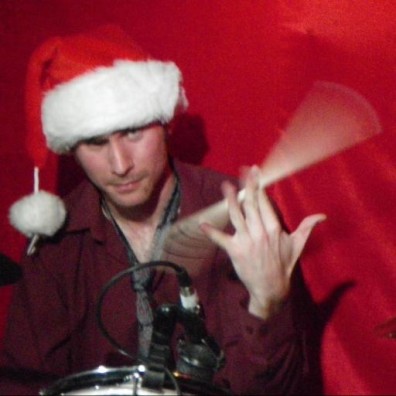 Alec Smecher is a software developer, musician, and artist in Vancouver, Canada. He works with antiques and discarded electronics to create functioning surrealistic devices. His work brings the tools of the maker community into the realm of expressive art.