This ultrasonic “bat glove” lets you feel things at a distance.

Tacit is a wearable system that translates the distance to anything you aim your hand toward into pressure on your wrist. The closer the object, the greater the pressure. Sweep your hand around, and the device conveys to you a tactile image of your surroundings. I designed Tacit to help vision-impaired people navigate their environments, but it’s also a fun and effective sensory enhancement for fully sighted people — especially in the dark.

My first version of Tacit was a headband with vibration motors that ran faster when objects came closer. But this design had a distracting “mad science” look, and most obstacles, like furniture, are below head level. I also found that motors vibrating against your skull will quickly drive you insane.

I realized that it was my own sighted prejudice to want to attach vision-simulating sensors to the head. The hand is more directable and useful, and putting a device on the back of the wrist leaves the fingers free.

For rangefinders, I used two $30 ultrasonic sensors that detect objects up to 10′ away, angled apart to take in a broader swath. I looked at smaller infrared sensors, but they were confused by sunlight, remote controls, security cameras, and absorbent surfaces. Laser rangers would be the most accurate, but they’re far more expensive.

The rangefinders input to an Arduino Pro Mini, which controls 2 small servomotors to rotate flexible rubber extensions into the back of the user’s hand (Figure A). The servos have a split-second response time, which gives the Tacit an intuitive feel. Everyone who has worn the device figures it out immediately.

Step #2: Mount the sensors and effectors.

Now I’m working on Tacit 2.0, refining the software, shrinking the hardware, and using a rechargeable battery with some kind of blind-friendly charging method, either wireless or a magnetically-aligning power plug.

Many thanks to the designers at Device Design Day, who gave me tons of positive feedback on earlier versions of Tacit.

The circuit and software are released under a Creative Commons BY-NC-SA license. 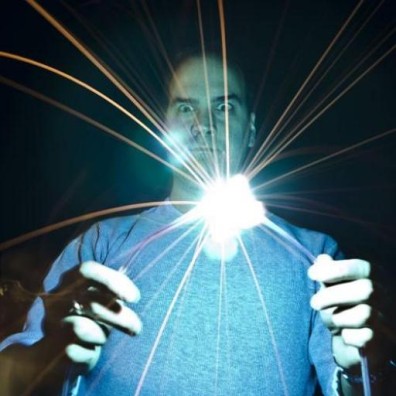