Solving A Molding Conundrum: How to Really Print Sphere Molds

In my last post, I made sphere molds to produce a scale model of an artificial reef unit to restore oyster habitat in the San Francisco Bay. While the results were semi-satisfactory, I learned that the molding and casting process was not suitable to full-scale production, since the 3/4 spherical model contained a vicious undercut which made castings difficult to remove.

In mold making, undercuts are defined as any geometry that makes it difficult to de-mold the model (or subsequent castings) from the mold. I wanted a relatively spherical form for both aesthetic and functional reasons. It occurred to me that that if I designed the unit as a hemisphere, I could avoid undercuts completely. Here is a Rhino screen capture of the second iteration of my design:

As this next image makes clear, there is no undercut that would lock the form in a mold when de-molding:

I redesigned this second version using simple, Euclidian geometry and subtractive, Boolean operations within Rhino, my favorite 3D modeling program. This could also be accomplished using other software.

Although version 2 would make the form easy to cast in full-scale industrial production, I realized quickly that there was no consideration given to attaching one hemisphere to another. This would be important when full-scale, 3 foot diameter reef units were installed onsite and faced the destabilizing affects of wind, waves, and tidal movement.

For the third iteration of the design, I modeled a tab and void system which would enable one unit to key into another and hopefully, due to weight and gravity, be stable enough to stay together vis-a-vis the aforementioned tidal and physical forces that it would be subjected to when installed full-scale in the Bay. The two units that will form the sphere can be cast from a single mold. The unit set on top is rotated 90°, and its tabs seat in the voids of the bottom hemisphere.

I want to prototype the casting process again in 1″=1′ scale, so the next step was to 3D print the model. My favorite printer at Maker Media Lab is the Afinia — it rarely, if ever, fails to produce a serviceable print, even on fast setting.

Sure enough, the Afinia quickly produced a series of nice prints. Having these in hand, I was able to visualize how the reef would take shape. As I mentioned in my last post, the potential reef sites in the San Francisco Bay have roughly six foot tidal range — that’s why I designed the full-scale spherical units at a three foot diameter. When stacked, they may help to block erosion caused by wind, waves, and tidal surges endemic to climate change, as well as offering much needed hard substrate for oysters to attach to.

Two units more or less pressure fit together, but I tacked them together with a little hot glue.

Future posts will include why oyster habitat restoration is important for our local watershed, visits to potential reef sites, and full scale prototyping — stay tuned!

5 thoughts on “Solving A Molding Conundrum: How to Really Print Sphere Molds” 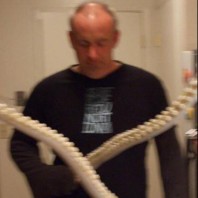