Well Twi-hards, the time is here. That special day in November when you no longer have to dream of powdery white skin and the smell of blood (and teen angst) in the morning. You can live it, man. Well, vicariously through the screen presentation of the much anticipated debut of the Twilight Saga’s New Moon.

To celebrate, we’ve ditched the not-so-vamp-friendly knitting needles for a kinder, gentler (read: can’t be used as a stake) yarn tool: the Knifty Knitter Flower Loom, to make the Ode to Alice Cullen wrist warmers. Gather ’round, Twi-sters!

Round 1: Leaving a 6″ tail, “e” wrap yarn around all posts of the flower loom twice.  Knit off (taking the bottom loop over the top peg).

Repeat Round 2 until the piece measures 6″.

Thumb Opening:
For this part you’re going to work back and forth instead of in rounds for 6 rows. (This’ll not only give you your thumb opening but also, create a cool, twisted stitch-looking effect!) See the lesson below for help.

Revert back to working in rounds for 2½”.

Cut the yarn, leaving a 12″ tail.  Thread through the yarn needle and feed through the “live” loops on the loom.  Pull the stitches off the loom.  Put the wrist warmer on and flex your hand so the top fits as desired.  Sew a couple of small stitches to secure.  Cut.  Weave in the ends.

Step 1: Leaving a 6″ tail, wrap the yarn around the holding peg.  Let it hang.

Note:  I have my yarn double stranded to make the worsted weight yarn bulky enough.  If you’re using chunky yarn, only one strand is needed.

Step 2: Using the “e” wrap (named because it looks like you’re making a cursive “e” with the yarn), wrap the working yarn (that’s the yarn attached to the skein) around the first peg to the right of the holding peg.

Step 3: Continue wrapping the yarn around all the pegs.  Keep going around a second time, until the pegs are all wrapped twice.  You’ll only need to do this to create the first round of loom knitting.  After that, since you’ll have an established round already, you’ll only go around once.

Step 4: Place the working yarn on hold by making a loop and putting it on the holding peg.

Step 5: Pull so the loop is secure enough to stay on the holding peg.

Step 6: Use the hook to lift the bottom loop on the first peg over the top loop.

Step 7: Let it drop off the peg.  Repeat all the way around.

Once you’re finished with the last loop on the last peg, undo the working yarn from the holding peg and wrap all the pegs again.  Use your hook to work this round as you did the last one.

Continue in this manner following your pattern.

Step 8: To make the thumb opening, we’re going to break the rules a bit by twisting the stitches and working back and forth (for as many rows as the pattern calls for), instead of in rounds.  To do this, instead of wrapping all the pegs beginning with the first one to the right, you’re going to come IN FRONT of the first peg to the left and then “e” wrap the second peg (see below) and around.  Work the row with the hook.

Step 9: When you get to the last peg (which will be the first one to the right of the holding peg), reverse what you did before by coming in front of that last peg you just worked and repeating the method above.

Once the thumb opening is complete, revert to working in rounds as per your pattern.

Step 10: To finish, cut the yarn, leaving a 12″ tail.  Feed it through the “live” loops and remove per your pattern.

Repeat for the second wrist warmer.

Be sure to post up photos in progress as well as your finished Alice Wrist Warmers to the Knifty Knitter Loom-Along Flickr Group and have your chance at winning a host of cool giveaway prizes! 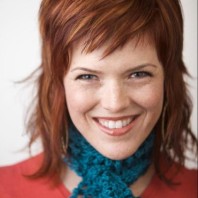 Vickie Howell is a mother, self-taught designer, writer, viral marketing consultant and DIY Lifestyles expert with a focus on the Needle Art