Be Mine: Making a Glowing, 3D Printed Engagement Ring

This past August, I got engaged to my best friend, the beautiful woman I’m going to marry later this year. We met at church, bonded over being huge dorks who like music, Star Wars, and Pokemon, and eventually realized that we had way more to offer each other than plain old friendship could contain. So, after a dislocated shoulder and a late night on Google Chat (a story for another time), we went on a date. Three years later to the day, I proposed, at the same music festival where we went on our first date. And when I took a knee, I had a glowing, 3D printed ring in my hand.

I’d always wanted to use some creative placeholder when I proposed, because I knew I wanted her to pick the ‘real’ ring, the one she’d wear for the rest of her life. If you’re going to wear something for that long, you’d darn well better like it. The idea to make it glow came from our mutual love of glowsticks. After a dozen glowstick fights at home and church (another good story for another time) and a fantastic glow stick Christmas tree, we’d both taken to wearing old glowsticks on our wrists as reminders of each other.

I spent time earlier on thinking about buying a hollow plastic ring and making glow fluid, but struggled to find a place that had already designed a ring of that kind. Thanks to MAKE and other blogs I follow, I knew about 3D printing, and a quick Google search took me to Shapeways.com.

One of Shapeways’ great features is a pair of message boards: “3D Modeler Wanted” and “3D Modelers for Hire”, where talented designers can connect with folks who want to commission a design. I posted a description of my idea there, and before long I heard from Corinne Hansen. We hashed out some details, and she designed a ring to my specifications. She did a fantastic job, and the turnaround time was far better than I expected. I uploaded the STL file and ordered several copies. About a week later, I had the rings in my hands. Including Corinne’s commission fee, the whole process cost me less than $70, and was worth every penny.

As you can see from the pictures, getting the ring to glow is a little tricky. The ring is small (size 5) and the hollow area inside it doesn’t hold much. I managed to make something work with regular glow sticks, snips, a small glass bottle, and a syringe. The ‘gemstone’ in the ring is a separate piece, and can be removed to add fluid to the ring.

It’s been a while since August! She’s got a traditional jewel ring now, and plans for the wedding are coming along. We’re getting married in the church where we met, We’re excited for what’s ahead, and glad we could share part of the story with you!

See all of MAKE’s Valentine’s Day projects and ideas here. 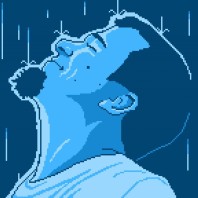 Andrew is a Software Developer from the Philadelphia area and a graduate of Rochester Institute of Technology. His hobbies include video, board, and card games, studying philosophy and theology, and staring at his Raspberry Pi and promising himself that one of these days he's going to make something really cool with it.