Shermac is a Belizean friend who comes to Cholula two or three times a year for a couple of months. He’s made these boats since he was a boy, in his hometown Mullin’s River, to play boat races in the river and later, in Caye Caulker island, as a handicraft that attracts the attention and desire to own one of tourists and locals alike.
These boats are made of three types of wood mainly: moho, pine, and Santa Maria. Sometimes he also uses mahogany. Moho, Shermac’s favorite, is a very light tropical wood that floats like cork when it dries completely; so it is ideal to make sailboats. Pine is the heaviest and hardest wood – and, therefore, more fragile for this kind of work – and Shermac uses it to make replicas of engine boats (or Belikin boats), fishing boats, and yachts. The Santa Maria wood is the most flexible of the three; it is also light and boats made with it sail pretty well in the sea.

Shermac uses very simple tools for the process. The first step is shaping the piece of wood with a machete and sometimes a coping saw. Then, with a smaller sharp knife – and I mean any knife, even a kitchen knife, as long as it is sharp -, he cuts away any bumps from the surface and begins working on the details, as in engine boats where he has to carve a rectangular hole that represents the cargo deposit in real boats.
Afterwards, he rubs the surface with sandpaper until it is smooth and gives the final touches to the boat. He does this by hand.

Once this part is finished, he makes the details with plywood and glues them on, like the cabins on the engine boats (whose interiors in the photo are painted white to cover up the porosity of the wood). For the sailboats, Shermac carves and paints bamboo masts – bamboo is also used to make the masts of real sailboats.
The last step is painting the boats. Shermac uses wood paint diluted with thinner and lets the boats dry in the shade, since putting them in the sun would bring up bubbles on the paint coat. Again, for the sailboats, after painting and placing the mast, Shermac cuts, sews, and puts the cloth sails which he obviously does himself with no more than scissors, thread, and needle.
Depending on the size and type of boat, Shermac finishes a boat in approximately three days.
These boats are a clear example of the inventiveness and creativity put to work with little resources that we can find a bit further down the Rio Bravo. Thanks, Shermac!

4 thoughts on “Belizean boats in Cholula”

Tagged boating Something I want to learn to do... wood 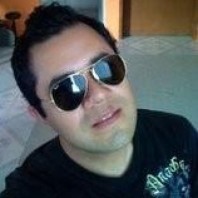