How Jankosaurus, the Amphibious Trike, Got its Name

Back in 1969, before Burning Man, before video games, before Make:, Hobart Brown welded some stuff to his kid’s tricycle and challenged his neighbor to a race. He lost the race, but declared it had been “For the Glory,” and so began a 46-year legacy that has become Arcata’s Kinetic Grand Championship, the self-proclaimed “Trifecta of the Art World.” Every year kinetic artists create fanciful, human-powered sculptures, and race for three days and about 50 miles, over roads, sand dunes, and water in Humboldt County. “That looks like fun,” Dawn Thomas said to me. “Let’s build a vehicle to compete in that.”

We’ve built human-powered vehicles for road, rail and water, so combining those ideas into something amphibious seemed a great next step for us. For our Trifecta vehicle, we designed and built a two-seat, side-by-side, amphibious tricycle. Thomas already knew how to weld and lace bike wheels to ¾” axles. Each rear wheel is independently driven, eliminating the need for a differential. We bought new disc brakes and bolted those to the axles. To shape the frame, I bent steel tubes over wooden forms. To make the paddle wheel, I cut plastic barrels into rectangles to fit in the oven, softened them, and then vacuum formed paddle blades. We harvested derailleurs off ten-speeds from a dumpster, and used old bike inner tubes to web our seats. Thomas welded mesh metal into a roof rack so we could carry gear. We made floats by sewing tarps into pontoon shapes and used air mattresses and pool toys as air bladders. Our finishing touch was to paint it an eye catching lime green and black.

Finding the right name for a thing you have made can be difficult, especially when the essence of the thing has not yet been revealed. Thomas and I collaborate under the name “Three Feet of Air” and while past projects such as The Red Couch, The Chipper Chopper or Danger Island were easily named, naming our Kinetic Grand Championship entry turned out to be more elusive.

A week before the race, we brought it to Maker Faire Bay Area and we settled for calling it Trikosaurus, because it felt big to us. To be honest, we just couldn’t come up with a name for the vehicle besides “The Big Trike,” because that is what it was for us. Hours before we packed to leave for the race, we cut up some blue plastic barrels and fashioned stegosaurus plates to try and dress it up a little. We carried the color and plastic theme over to our helmets and added a pair of nameplates to the trike’s roof rack.

We started the three day race in a delicious state of eager anxiety. “I was hoping to just finish the race,” says Thomas. I wanted to win. I’d made models and built test articles. We’d had a partially successful water test, in which one pontoon sprung a leak and we’d been unable to climb back out of the water, but had been able to paddlewheel along at about 3 knots. What no one expected was our choice of cheap bearings had already doomed Trikosaurus. With 150 road miles of training we’d squeezed into the schedule, the bearing mounts had moved, the axles had slipped, and the drive wheels started scrubbing, stressing the weld joint between the wheels’ flanges and the axle. Certainly the strain on the joint as we crossed the dunes didn’t help. We finished Day One among the top racers.

Day Two opened with a water crossing of about a mile and half. I was confident this would be our shining moment. “I was afraid a pontoon would fail and we’d sink,” Thomas adds. We did not sink. We passed many other racers. However, as we tried to climb the boat ramp and exit the water, the unimaginable happened. I heard a “TINK”, we dropped a couple of inches and with a “POOMP” we fell onto one of our pontoons — our axle had sheared through at the wheel. I looked at the wheel laying there on top of the pontoon and all my energy drained out of me.

I felt that was the end of the race for us. I turned my back on Trikosaurus and went to find a bathroom. I planned on telling the team the race was over, to get the trailer and load up the broken vehicle for a long, inglorious, grumpy ride home. “Our pit crew was not about to let him give up,” says Thomas. Honorary crew member Altair Hatton charmed Steve Cross, the official “Judger of Others,” who donated his bike trailer. Pit crew member Dave Harris duct-taped the trailer into the place the wheel had been.

I looked at the thing our tricycle had become and thought, “Dang, that is janky,” Harris had transformed Trikosaurus from a three-wheeler with two drive wheels into a weird four-wheeler with one drive wheel. Since everyone else had pulled together a solution, the only thing to do was to get on and start pedaling and hope to make it 20 miles.

As Dawn and I left the boat ramp, even though our vehicle had suffered a major structural failure, we were also elated. We’d already begun calling the trike Jankosaurus and the new name fit. It was playful, it recorded a moment in time, and it elevated our vehicle from over-thought under-engineering to a stronger can-do teamwork attitude. As the motto of the race is “For the Glory,” trying to race with a bike trailer holding up the back corner seemed a glorious undertaking.

Changing the name officially required me to petition a Race Goddess. At the lunch stop at Eureka Natural Foods, I enlisted the family of the race’s “Rutabaga Queen.” We used their glitter purple and silver duct tape to change the name on our vehicle to Jankosaurus.

The bike trailer held together through Day Two’s road miles, including a three mile hill climb, but when we reached the camp its metal and axles were severely bent. We needed another solution for Day Three, especially since Harris had used some pontoon parts to hold up the trailer and we needed those for the next water crossing.

Pit crew member Patricia Algara had been hard at work spreading the story of Jankosaurus among the other racers. Elliot Naess, a long-time kineticist, donated a bicycle. Harris got to work: He cut the bike trailer free, and in the fading light of twilight, used driftwood, rachet straps, baling wire, and duct tape to secure the bike to Jankosaurus. His final touch? “I used green tape that matched Jankosaurus’ color and wrapped everything so it matched and looked great,” Harris says. For his enthusiasm and attitude, Harris earned a new name: Algara nicknamed him “Honey Badger.”

Day Three’s water crossing, two miles across the mouth of the Eel River in Ferndale, went smoothly. “I was very concerned our other wheel would fall off,” says Thomas, since the cold water might have weakened the steel of the remaining axle. We climbed up the boat ramp carefully, dropped all our pontoon gear, and began a calculated sprint for the finish line. Harris kept haranguing us to pedal faster. He really wanted us to win. But the race isn’t really about the fastest time; it never has been, ever since the first race.

The sun started to burn away the clouds as we reached the finish line on Main Street in Ferndale. Jankosaurus circled the intersection at the finish line showing her good side, and then again showing her better side where the bicycle was strapped to the frame. “I didn’t know that it wasn’t supposed to look like that,” said one bystander. Race Emcee Amy Berkowitz invited me up on stage to explain the name change. “Well, we started as Trikosaurus, but that wasn’t quite right. It was a little too perfect. When our wheel fell off in the morning of Day Two, and we had to go 20 miles on a bike trailer and one drive wheel, our perfect vehicle had become gloriously janky, so we renamed it Jankosuarus.”

For their efforts, Dave Harris and Patricia Algara won “Best Pit Crew,” while Dawn Thomas and I won the “Poor Pitiful Me” award — renamed to the “Never Give Up” award. Whether it’s a race motto, an award, or a vehicle, finding a name for something people make is a key part of making. I’ve learned not to worry too much about it … eventually the right name shows up.

Editor’s note: Check out van de Walle’s slideshow below for Jankosaurus progress pics and other vehicles from the Kinetic Grand Challenge.

6 thoughts on “How Jankosaurus, the Amphibious Trike, Got its Name” 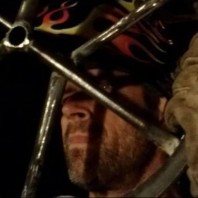 I use my human powered kinetic art to re-ignite people's desire to play.