Think back to your first wearable tech experience: maybe it was the communicator badges in Star Trek, the palm flower crystals in Logan’s Run or the man-turned-machine in Terminator. These devices could simplify communication, monitor life functions, or even transform physical bodies. We all loved it, and we’re still seeking it. We want science fiction to be real because we want to feel special, aware, and powerful. That’s why wearable tech is our now, and the Flora microcontroller is our BFF.

Flora is a tiny but mighty microcontroller from Adafruit that is stitch- and solder-friendly. It’s got a built-in USB jack for easy Arduino programming and also a JST jack for fast battery plug-in. The best part is this microcontroller loves NeoPixels. If you haven’t seen NeoPixels, imagine mega-bright RGB LEDs with the ability to talk to each other. Adafruit’s NeoPixel library for Arduino has made this an easy task, so anyone can make a wearable light show. So, what do you want to be? What will be your transformation? Check out these fabulous four projects and make your own sci-fi real life.

What’s one thing all superheroes have in common? They’ve got a special power, or at least a device that makes them boss. These action bands by designers Niki Selken and Annelie Koller will make you the tower of power. Just move your arm and show off your color-changing lights and sounds. Feel free to sock like Batman, chop like a Ninja Turtle, or ward off bullets like Wonder Woman. Your powers are about to be known.

These bands are a family-friendly project involving some sewing and light soldering. The fabric base is a hacked headband with decorative laser-cut pieces (which can be simplified for young ones with felt scraps). A Flora reads an accelerometer to capture the arm movement, which is then sent to a magical NeoPixel and piezo speaker for heroic fun. Have your cape and video camera ready.

You’ve always wanted Lady Gaga’s futuristic fashions, and now you don’t have to wait. This dress by maker Samuel Clay has 40 dancing LEDs that are sure to get attention. Will your light pattern be hula hoop, sparkles, raindrop, spiral, or random colors? Let your emotions be your guide — you’re sure to look glam with any of them.

This dress hacking project is for someone comfortable with sewing, as you’ll need to stitch six LED strips to the lining of a dress. If you’re crafty, you can also choose to create casings of sheer ribbon for the strips. For the wiring inside, you may want to consider Adafruit’s silicone wire, it’s incredibly flexible. Once you’ve got everything assembled, just program the Flora with your favorite pattern and you’ll be off dancing in no time. You go, modern Marilyn Monroe.

There’s a music duo that just beats them all when it comes to nerdy chic tech. They’re French and they got popular in the late 90’s — you better be thinking Daft Punk or no Quizzo for you. These headphones by caitlinsdad are like a light organ for the ears, making you an instant Daft Punkee.

This mod is a combo hack of two Adafruit tutorials and it’s sweet! The headphones use a Flora and two NeoPixel LED Rings facing the speakers for the light magic. Not only does this soften the lighting, but it creates a mysterious effect. Meanwhile, the microphone amplifier board works its magic syncing the LEDs to the music. You should be a soldering fan for this project and be prepared to tidy up the wires at the end. It’s a great build for your listening pleasure, or not, as a friend will probably steal them from you. Well, someone will experience music nirvana.

We live in a complicated world surrounded by devices and EMFs. Maybe you’re starting to question your environment and fancy yourself needing a spacesuit for planet Earth. If so, this is the build for you. Designed by Afroditi Psarra, this dress allows you to sense EMFs through haptic and sonic feedback. The most interesting thing about the dress is its sensors, which are two embroidered copper coils that act like antennas at the wrists. You are the detector.

The Flora takes in information from the wrist antennas and translates that as an output using a vibration motor and headset. The zipper is more than just decoration, providing a filter and volume control for the audio. This project requires a bit more advanced sewing and soldering expertise, but when you’re through, you’ll know more about your neighborhood than the Army Corp of Engineers. Be all you can be.

Get your own Flora microcontroller and wearables components in the Maker Shed, and show us your awesome creations. 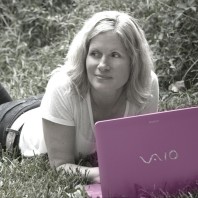