Giants of the Micros

Micro-sized indoor R/C helicopters that launch from your palm and hover in midair never fail to make the uninitiated gawk like cats tracking a moth. Toy stores are filled with these inexpensive miniature marvels, and it got me wondering: how did they come into being? I learned that the story of their development includes years of hard work, hobbyist passion, and an undeniable streak of brilliance.

The giants of the micro R/C scene are Alexander Van de Rostyne of Antwerp, Belgium, and Petter Muren of Nesbru, Norway. These two have made possible the affordable, ready-to-fly indoor R/C helicopters. Van de Rostyne’s models from Silverlit Toys and Muren’s from Interactive Toy Concepts (ITC) are the market leaders and the original products that started the current micro R/C heli craze.

Van de Rostyne is an electromechanical and computer science engineer who has worked in marketing and management at Motorola and Apple Computer, where he says he “got the bug for simple and user-friendly high-tech products.” He’s currently CEO of a 50-person web agency and partner in a software company.

Muren is an R&D engineer who studied hydro- and aerodynamics and has experience in mechanical engineering, electronics, and software development. He manages a team of 20 engineers developing videoconferencing systems at Tandberg ASA, does consultant work for the UAV industry, and also runs his own company, Proxflyer.

Of course the two men’s “hobby” is their true obsession, and has become a profession in itself. Van de Rostyne explains, “I have been a passionate modeler for more than 40 years now. There is no single topic in my life that I’ve spent more time on. For me it was always much more than just spending my free time. It became a way of life. When I got bored in a business meeting, I started making sketches of all sorts.”

Muren says that his hobby know-how blends naturally with his career skills when he’s designing his inventions. “Most of the development work is done in my private workshop as a modeler/hobbyist — but then again, I have experience as a modeler that probably could be classified as professional.”

In the late 1990s, R/C helicopters were out of reach for casual buyers. You had to build, tune, and learn to fly a model that was large, heavy, dangerous, expensive, and just plain “fiddly.” Van de Rostyne explains, “You have to imagine that in those days a typical helicopter weighed 8 pounds or so, and there were no indoor helis at all.”

In order to bring the joy of helicopters to a larger demographic, some major problems had to be solved: miniaturization, stability, steepness of learning curve, and price. The first step took place when, despite the warnings of friends who thought it couldn’t be done, Van de Rostyne set to work on his Pixel series of miniaturized electric helicopters.

In 1997 the Pixel 1 took flight, weighing 125 grams. He explains why this was such a feat at the time (before the advent of ultra-light Li-Po batteries): “The biggest challenge was (and remains to some extent) energy density, meaning how much energy can I get in what weight of batteries.”

As Van de Rostyne continued his series of incredible shrinking prototypes, his work led to the first retail indoor heli in 1999: the Ikarus Piccolo, weighing 280 grams and measuring 20 inches in length. Despite a relatively high cost and sensitive controls, the Piccolo allowed enthusiasts to spend hours perfecting their flight skills in their living rooms. It also had full 4-channel control, a gyro for stability, and the durability to survive the learning process.

While the Piccolo was amazing heli freaks everywhere, Muren was solving the second daunting problem: the quest for passive stability. The main challenge was bucking conventional wisdom: “All the textbooks I had stated that helicopters by nature are inherently unstable. After years of failure, hundreds of models, and thousands of test flights (most of them ending in spectacular crashes) it was sometimes hard to push on.”

However, by combining his theoretical and modeling skills, Muren was able to slowly make progress until, in 2002, he achieved perfectly stable flight.

“I still remember that feeling,” he recalls. “I am pretty sure it is close to the feeling a sportsman has after winning an Olympic medal.”

In his Proxflyer concept, Muren employed two counter-rotating rotors that tilted freely in response to horizontal movement, keeping the craft in the same position relative to its surroundings without the need for gyros or other electronic aids. The result is an almost magically stable, light, simple flying machine.

In videos on his website, a prototype hangs elegantly in space, silently compensating for destabilizing forces, even when Muren tugs the body of the craft with his fingers. This new kind of helicopter also used greatly simplified controls, more akin to an R/C car with an up/down stick added on.

It was only a matter of time until this technology would be brought to the mass market. Muren recounts: “I instantly knew that this could be the start of something very big.”

The process of going from prototypes to a retail product was a new challenge for Muren. He says his years as a development engineer were instrumental in overcoming the obstacles: “Maybe most important of all was that I had learned to never give up — even at times when 20 engineers and 200 workers in a factory in the middle of Asia just sat there and looked at you, waiting for you to tell them how to solve the problems and get this thing to work.”

The 50-gram Bladerunner was released in 2004, offering an ultra-light aesthetic and a flying experience more reminiscent of rubber band-powered, balsa-and-tissue planes than of copters that used high-rpm rotors to lift their weighty power source.

Subsequent versions of the Bladerunner offered new options and improved performance, culminating in a new model called the Micro Mosquito. This latest incarnation has a 6-inch rotor and weighs only 20 grams. It also offers a sleeker, uncovered design similar to Muren’s prototypes, and green LED “eyes” that accentuate its insectoid appearance.

Van de Rostyne was not far behind in the race to retail, with another groundbreaking helicopter called the PicooZ, the tiniest yet at 10 grams and 6 inches long. Costing around $30, it has a tough foam body, auto-stability, and a simple 2-channel control scheme.

Melding of the Minds

Muren and Van de Rostyne met in 2003 and had a ball flying their models in Van de Rostyne’s living room. The fruit of this meeting was a friendly competition between the two, producing successive pairs of impossibly tiny helicopters. Since then, more models have been produced, some less than 2 inches long and weighing as little as 1 gram.

The two designers are constantly releasing new retail versions of their models. Among Van de Rostyne’s copters is one notable for its aesthetic appeal. The PicooZ Pluto is a 3-channel, minutely detailed model with a classic bubble canopy and open tail-boom structure. The design is reminiscent of the iconic Bell 47D1, famously suspended from the ceiling of New York’s Museum of Modern Art.

One of Muren’s latest, the Micro Mosquito 4×4, has mechanical and control innovations that set it apart from previous models. It incorporates four motors and 4-channel control, which now allow the helicopter to “slide” side-to-side while the body remains facing forward. This is accomplished via two separate tails with independent rotors that extend at oblique angles from the body of the craft.

Beyond staying in touch with each other, the two designers communicate with their peers, their fans, and the larger hobbyist community through discussion forums such as rcgroups.com. They also interact with their customers there, offering tips and encouragement to those of us who love tearing into the retail products, modding them to improve their function or appearance.

Their kinship with other enthusiasts is unsurprising, since Muren and Van de Rostyne insist what they value most is bringing joy to users of their technology. Van de Rostyne sums it up: “When designing products is driven by a dream, then that dream will become tangible in the experience of the final product.” 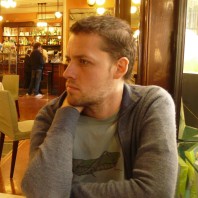 Adam Salter (adamulus@gmail.com) is a burnt-out stock trader and former Angeleno. He currently lives in Rome where he writes freelance and enjoys the incomparable victuals.