The Birth Of A Cupcake Car

I first saw drivable cupcakes and muffins at Burning Man in 2005. It was one of those things that you can’t quite grasp. What was I seeing? Ingenious!

By sheer coincidence, I met (and eventually fell in love with) with one of the original cupcake builders.  Through him, I became a colleague of the über talented and creative folks of Acme Muffineering.

A little starstruck at first, I snapped lots and lots of photos of the cupcakes and muffins in their lair noting how they were constructed. I asked a lot of questions and signed up on the mailing list to check out the Muffineering archives.  In the back of my mind, I knew I wanted to build one but I tend to come up with crazy projects and never follow through. Maker Faire 2013 changed that!

Greg Solberg let me drive his cupcake – the same one David Letterman crashed into a Christmas tree on stage on his show!!!!  Driving it through the crowd, I saw people wave and smile and heard a few, “I love those cupcakes!”

OK. So how do I actually go about building my own cupcake?  The archives helped a lot as far as knowing what materials I was going to need.  I started sketching ideas and search the internet for inspiration – a Devils Food Cupcake!!

I did a little shout out to the universe by way of Facebook and emails and was gifted a badass mobility cart from my friend, Joel, who is a second-hand store shopping genius.

With no garage or shop of my own and realizing some of the build was going to require at least one more set of hands, a couple of challenges came up almost immediately:

Tin folding is definitely a two person operation. After four 4’x4’ sheets of metal are cut into an arc, you have to use a bending tool to create the folds so the metal looks like cupcake paper. It involves sheer force and a lot of physically flipping the tin over for every single fold.

2. I also needed a space to store the cart and build the cupcake.

Once again, the universe answered with my boyfriend driving the special muffin tin bender bar (created by the Acme Muffineers!) to Portland from the Bay Area AND an offer from another creative genius to use his big, warm garage full of useful tools!

The folded tins and cart were transported to their new “home” for the next several weeks where I struggled with almost every aspect of the build. Attaching the tins with rivets was physically challenging – seriously. Then I discovered I overlapped the folds too closely and the tin was too small. I had to take it apart and put it back together again. Then it was floppy. It took me an hour to figure out how to get my body into a position where I could put enough force into my hands to squeeze each fold closer together to tighten the diameter. Whew!

Next up was the mobility cart’s size. A lot of the muffins and cupcakes use an electric wheelchair motor to power a custom-built trike inside the tin. Once the mobility cart was stripped down to its frame, motor and wheels, I realized it was really going to be fast and agile AS IS. That meant the whole cupcake would need to be built a little different than planned.

The wheels on the mobility cart extend beyond the tin. I had to figure out how to connect the tin to the cart but also allow for wheel clearance. Lots of measuring and sketching and help from my friend Otmar, who offered me the building space. We calculated ground clearance and figured out where the base would be inside of the cupcake then determined I would cut openings in the tins to allow the wheels to extend, pivot and move up and down.

Now that it’s summer, the project has moved to my house and I’ve made significant progress on the cupcake in the last couple of weeks. A wood base sits as a platform on the mobility cart and the tins attach to it with six hinges.  There’s a hole in the platform for my legs and I’m moving one of the two batteries up onto the platform to allow more room for my feet. Sections of the tin have been cut away to make room for moving wheels. To disguise the wheel openings, I’m planning to make cloven hooves to act as fenders. To give the illusion of flames and cover the higher ground clearance, I’m wrapping the bottom of the cupcake with metallic red and gold pennants that will flutter as the cupcake moves.

With advice from original muffineers Lisa Pongrace and William Keller, I’ve built a sturdier frame for the top and have great notes on how to create the “frosting” out of chicken wire, batting, coil-less safety pins and faux fur.  I’m looking forward to that!

Since the ultimate goal for this cupcake is to get it to Burning Man this year in my ’77 VW Bus, I made the cupcake to be easily taken apart. The base detaches from the cart by four bolts and the tin comes off the base by unscrewing the hinges. The tin splits in two places and each piece can be laid out flat.

Throughout this project, I’ve learned to ask for help and I’ve received just enough to give me a nudge toward learning how to use the right tools, make the correct measurements, be creative when problems arise, know when there’s wiggle room, know how to be flexible, to be grateful beyond belief and know that it’s pretty cool to be making a drivable cupcake.

2 thoughts on “The Birth Of A Cupcake Car” 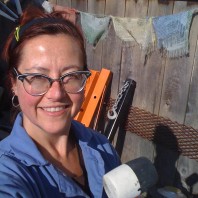