A Perfect Circle: An LED “supergroup” Collaborates on the Lux Lavalier

Mad Season, Cream, Prophets of Rage, the Traveling Wilburys — what do they have in common? Perhaps it’s that you’ve never heard of them, but they are also all supergroups — successful artists teaming up to create something new and exciting. In the world of LEDs, instead of Layne Staley, Tom Morello, and Tom Petty, more familiar names might be Debra Ansell, Jason Coon, and Ben Hencke. So you can imagine our excitement when we learned they were cooking up something together. Let’s meet these stars and learn how their solo projects led to an epic magnum opus — the tiny, mesmerizing LED pendant necklace known as Lux Lavalier.

Debra Ansell used to juggle the many hats of the entrepreneur as well, but prefers unbridled creativity to tax law, so has put aside bookkeeping to give herself fully to whatever inspiration strikes — frequently wearables, always LEDs. She describes her brain as a “chaotic cauldron of ideas” where she focuses on whichever project she is most passionate about, and pushes others down until they bubble back up again.

Jason Coon is a mild-mannered professional enterprise software developer by day. But at night, he assumes his alter-ego as the mad villain behind Evil Genius Labs. Jason started making LED art for fun, but soon became inundated with requests to buy his delightful objets, leading him to create the brand and its signature Fibonacci spiral LED matrixes. As an entrepreneur he describes himself as somewhere between Ben and Debra — he doesn’t want to make thousands of something but definitely more than one.

The ingredients to this mélange may seem obvious now, but the recipe evolved over time from the diverse experience of its chefs. For Debra it was wearables all along — she started with sewable LEDs, learned about Arduino, and graduated to a fiber optic dress that garnered a lot of attention. Over time she became aware of Jason’s Fibonacci boards and Ben’s Pixelblaze line, and as both started offering smaller versions Debra got excited about incorporating them into wearables.

Meanwhile, Jason and Ben had been collaborating for some time, Ben assembling classic Fibonacci256 boards and Jason adopting Ben’s board to create the Fibonacci256 Pixelblaze (obviating the need for maintaining his own firmware). When it came to making a wearable, Debra was top of mind as co-conspirator and they kept sending her successively smaller prototypes, like RGB Matryoshka dolls.

As the prototypes shrank, the challenge became how to power the device on the go. Despite advances in battery tech, the mAhs required to move this many electrons for a sustained period are still substantial. Debra had already been playing with a behind-the-neck battery holder, which shifted the weight burden away from the device and out of sight behind the wearer. Her final design appears similar to a typical battery holder except for one weird trick: the circuit is completed by attaching a magnet to the negative terminal, making the necklace itself a conductive strand that provides power to the device.

Other challenges? Debra’s chief complaint was that Ben and Jason are too nice! They also had difficulty naming the project — with a Twitter poll resulting in the predictable “Pixel McPixelface” — before settling together on the final name: Lux Lavalier.

Parting thoughts? Ben, like many Make: readers, started out blinking LEDs on a dev board, and fell in love with that simple yet delightful aesthetic. Jason quips that he never moved past that stage, and Debra gladly proclaims, “Let there be light!” 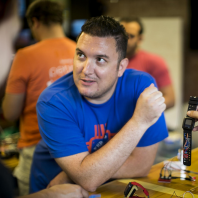